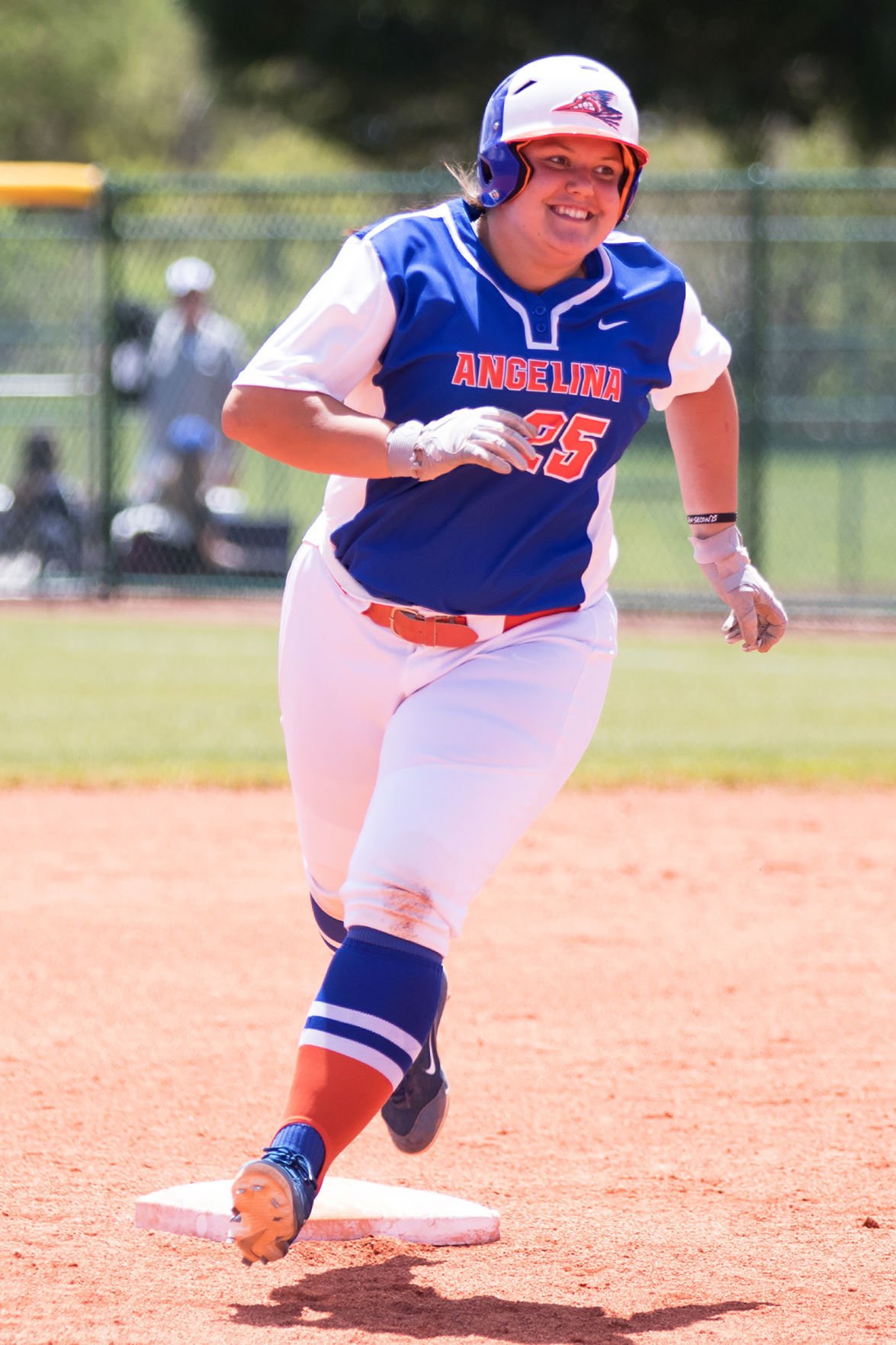 Angelina College’s Sara Mayes, who leads the nation in home runs with 8, leads the Lady Roadrunners into their home opener on Saturday. The Lady ‘Runners host San Jacinto College in a doubleheader starting at 1 p.m. at the Larry Phillips Family Sports Complex on the AC campus. 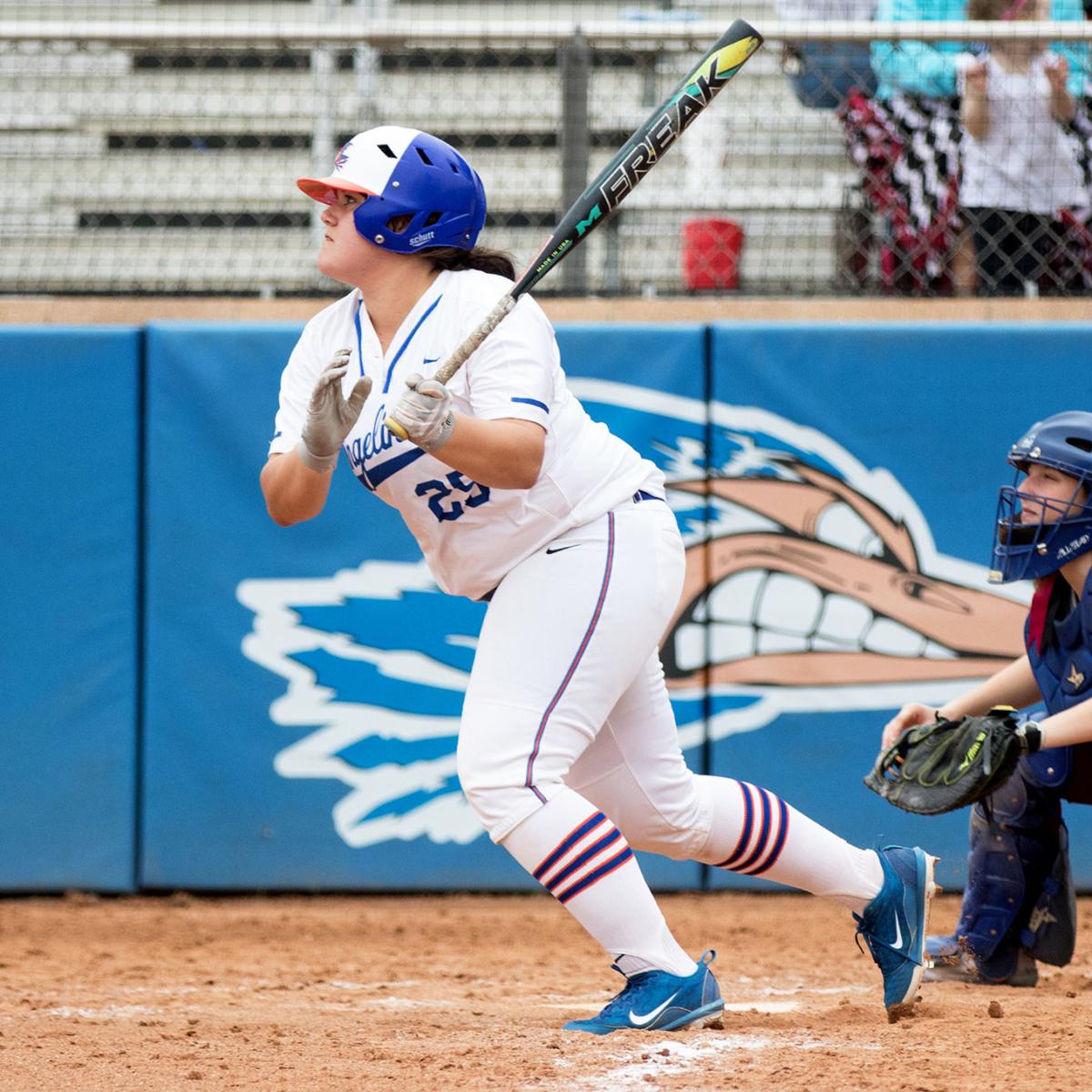 AC’s Makayla Rodger and the Lady Roadrunners host their home opener on Saturday against San Jacinto College. The doubleheader is scheduled for a 1 p.m. start at the Larry Phillips Family Sports Complex on the AC campus.

Angelina College’s Sara Mayes, who leads the nation in home runs with 8, leads the Lady Roadrunners into their home opener on Saturday. The Lady ‘Runners host San Jacinto College in a doubleheader starting at 1 p.m. at the Larry Phillips Family Sports Complex on the AC campus.

AC’s Makayla Rodger and the Lady Roadrunners host their home opener on Saturday against San Jacinto College. The doubleheader is scheduled for a 1 p.m. start at the Larry Phillips Family Sports Complex on the AC campus.

They’ve got some numbers to show off to the home fans.

Gaudy, eye-popping numbers. Some of them look like typos.

The Lady ’Runner softball team, under first-year head coach Joshua Barnes, got off to a slow start to the season, going 0-2-1 over the first three games — the tie occurred in a game called early because of darkness — but then roared back with four straight wins.

In those four wins, the Lady Roadrunners scored 61 runs, including a 23-12 win over Alvin College and a 17-5 win over Galveston College. AC then fell behind 10-0 to Temple College, only to rally for 14 runs in two innings for the 14-10 win.

The overall team batting average is .400. The overall team slugging percentage is .652, with six players carrying a .600 or better percentage. The team is second in the nation in home runs (15) despite playing four fewer games than the leader (Yavapai College, with 19 homers).

Sara Mayes, the Lufkin native on the AC roster, leads the nation with eight homers and is second in RBIs with 21. Her slugging percentage is an astronomical 1.345.

Perhaps the only people who aren’t astounded with such figures are Barnes and first-year assistant coach Molli Morgan.

“We’ve got the talent for hitting for sure,” Barnes said. “We’ve got some girls who can hit really well. They just bought into their approach and stuck with who they are. From the 1-9 spots, they didn’t try to be somebody else.

“The people who can hit home runs stuck with looking for good pitches, and the girls who are good at getting on base battled the counts and drew walks, got the bleeder hits and did whatever they could to reach base.”

Falling behind by 10 runs this early in the season would have been plenty of reason for a young team — there are only four returning sophomores from last year’s national runners-up squad — to assume it just wasn’t its day, but Barnes said the dugout atmosphere didn’t offer any signs of giving up.

“We got down to Temple pretty quickly, but it was pretty much self-inflicted,” Barnes said. “We’ve had a little of that early on, giving up some runs in the first few innings. Temple’s a good team with some quality returners. The girls didn’t get down. They kept talking about how we just needed our break and we could get right back into it.”

The break came with a simple leadoff walk to Kaylee Ancelot. Then, Barnes said all heck broke loose.

“After that, we just kept stringing hits together,” Barnes said. “It was really just a never-quit attitude, and the girls didn’t get down on themselves about falling down 10-0. The girls put up 14 runs in two innings, and they really just made my job easy.”

Barnes credited the rest of the team with finding ways to reach base in any way possible in order to set up the hot bats.

Clearly, the offense is clicking. Now, according to Barnes, it’s a matter of getting the other parts of the game up to speed. A brand-new pitching staff with not a single returning player is finding its way — Hannah Smart has 18 strikeouts in 12 innings, and Kaylee Berdoll sports an ERA of 2.91 over 212/3 innings — and the inexperience in the field has shown itself at times.

“Defensively, we’ve got to clean up early on,” Barnes said. “We have to accept who we are defensively and make the plays we can make. Pitching-wise, we’ve got continue to attack hitters. We can’t worried if there’s a leadoff double.

“One of our mindsets is, ‘Hey, have fun getting a bunch of leadoffs for the next three outs, because you’re going to stay there at second base.’ Our pitchers are starting to get it. We have four pitchers, and they’re all kind of growing, and we took some lumps early because they were trying to do some things they weren’t capable of doing. Now they’re learning how to get someone out with the stuff they have.

“From there, we just staff it. We want to get the 21 outs over seven innings, and we don’t care how we get them.”

Most importantly, the team has already adopted an AC softball tradition: never give up. Should the team find itself on the wrong end of a lopsided score early, the Lady ’Runners have shown they’re more than capable of mounting a patented, thrilling comeback.

“Hopefully, we won’t get down that far again,” Barnes laughed. “That would be the plan. But really, we want to be elite at our toughness and being in every game, and realizing we’re a team that has to fight, whether we win 2-1 or 14-10.

“We want to be a team that’s going to scrap until the end.”

Saturday’s home doubleheader against San Jacinto College is scheduled for a 1 p.m. start at the Larry Phillips Family Sports Complex on the AC campus.