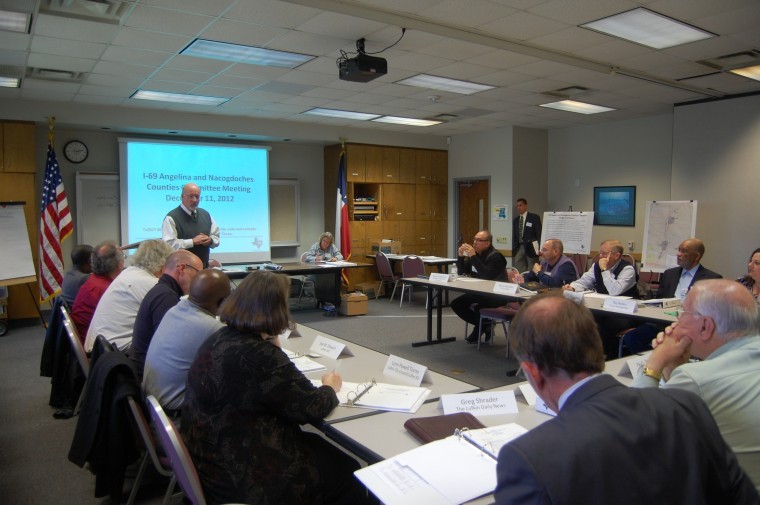 Facilitator Tracy Hill addresses I-69 Angelina and Nacogdoches Counties Committee members during its initial meeting at TxDOT’s district office in Lufkin on Tuesday. 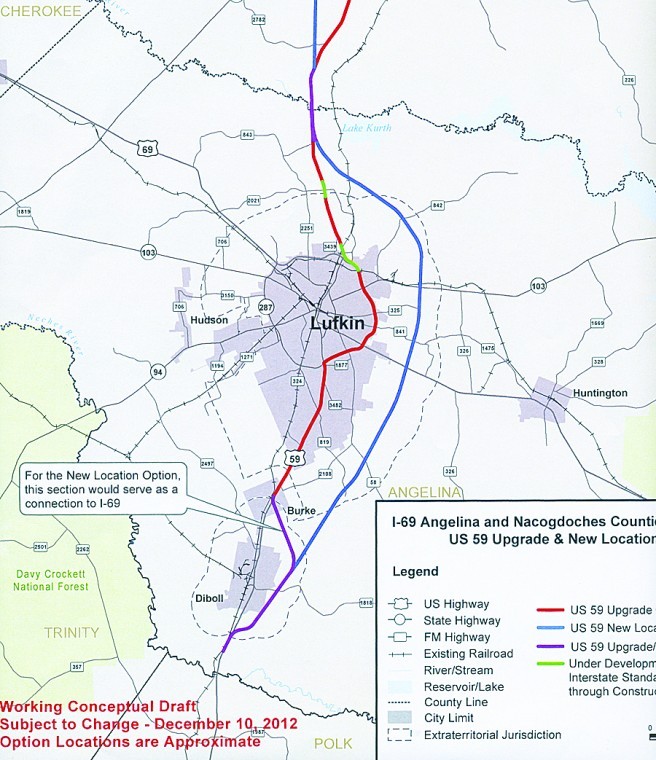 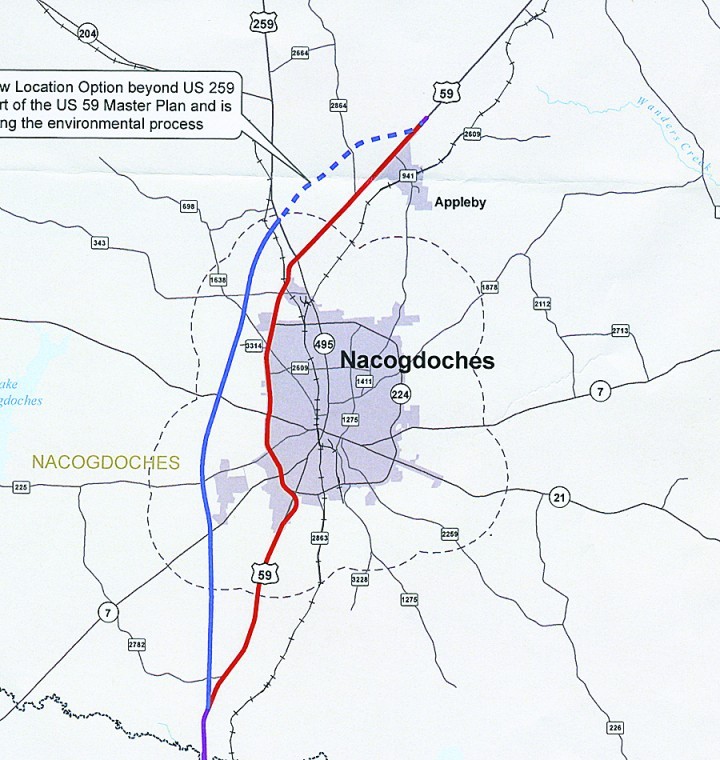 Texas Department of Transportation officials and I-69 Angelina and Nacogdoches Counties Committee members look at a map of possible routes during its initial meeting at TxDOT’s district office in Lufkin on Tuesday.

Facilitator Tracy Hill addresses I-69 Angelina and Nacogdoches Counties Committee members during its initial meeting at TxDOT’s district office in Lufkin on Tuesday.

It was a small step, but a step towards development of an interstate that will eventually transform and transverse East Texas.

With the goal of reviewing current transportation needs and concerns as they relate to regional mobility and local access, a committee of representatives from Angelina and Nacodoches counties came together at the Texas Department of Transportation’s district office in Lufkin on Tuesday to discuss issues associated with I-69 development in the region.

The committee’s responsibilities include making recommendations on I-69 route locations and improvements to U.S. 59 to meet interstate standards.

Its recommendations will also be used to guide TxDOT on how to move forward with a scoping study for I-69 development and determine the type and level of environmental process. Representatives were asked by facilitator Tracy Hill to express issues of concerns and any goals and objectives they have for the project.

“These people understand a lot of the issues in the community and what’s important to them,” Hill told The Lufkin News after the meeting. “There were some common threads: effective movement of traffic, safety, economic development opportunities and balancing traffic relief with community issues. This is a very good group to represent both of these communities. I’ve worked for 10 different (departments of transportation) in my career. This is exciting because it’s a new approach and a great new way to get that early outreach on how to do these kinds of improvements in the community.”

According to TxDOT officials, funding for the scoping study was awarded by the Texas Transportation Commission in June and supports the recommendations of the I-69 Segment and Advisory committees.

“Today is just getting their feet on the ground,” said Dennis Cooley, TxDOT Lufkin district engineer. “The expectation is to get the mind of everyone thinking along the same lines, so that at our next meeting, scheduled for January, we’ll really look for the feedback. This is just the infant stage of the process.”

TxDOT officials are seeking feedback on two possible routes through Angelina and Nacogdoches counties. One route would involve upgrading U.S. 59 to interstate standards with continuous access roads. The upgrade would include a six-lane highway in the current footprint of U.S. 59 through Lufkin and a four-lane highway in the current footprint of U.S. 59 through Nacogdoches. The other option, dubbed “new location” by TxDOT officials, would involve construction of a interstate-standard relief route east of Diboll and Lufkin and west of Nacogdoches, meeting with U.S. 59 just north of Appleby.

“The commitment from TxDOT is that in the development of I-69, we will look at development of existing corridors or the existing footprint before we start looking at anything that deviates from that,” Cooley said. “We went through the process with the segment committees — the Segment Committee Two and the Segment Committee One have this area — and both recommended that we go on the new location. Now that we have funding, we can start the process. We’re taking the information that the segment committees recommended, and we’re starting to drill down by working with this stakeholder group to do an outreach to the public, more so than what we’ve done in the past, to be sure that as we go forward, we’re going the direction that the communities want.”

“What I’m impressed with is that TxDOT has given us the time to sit down and give input for this,” Brown said. “They are very aware of our communities and want us to be part of the process instead of just designing something and moving forward. With the cross-section of our county and the cross-section of Nacogdoches County, we have tremendous representation. I think the voices of the people will be heard. What we’re after is transparency, not only for the design, but for the process as it moves forward.”

“I think today so far has been a learning curve for the individuals that haven’t been involved in the process yet,” English said. “I look forward to contributing in future meetings on behalf of the county to continue with the project and making sure that Nacogdoches is positioned along the way to get their fair share and that the project moves forward.”

TxDOT officials said they expected the scoping study to take about eight to 10 months before moving to the environmental impact studies. The committee’s next meeting is scheduled at 2 p.m. on Jan. 22 at TxDOT’s district office in Lufkin.

Progress continues in the development of Interstate 69 in other parts of Texas. The Texas Transportation Commission earlier this fall gave approval to designating a segment of I-69, concurrent with U.S. 59, from north of the Liberty County line to I-610 North in Houston, a total distance of about 35 miles.

Also, the Texas Transportation Commission recently approved $150 million for several I-69 upgrade projects including $60 million to redesign and construct the roadway to interstate standards between Driscoll and the north side of Kingsville.

The Federal Highway Administration has approved environmental clearance for the U.S. 77 project between Corpus Christi and Harlingen with a “finding of no significant impact,” meaning any and all future corridor projects have environmental approval.

The Texas portion of I-69 represents more than half the overall length of the national interstate — 1,100 miles of the 1,800-mile route — traversing the country.

A collection of our stories and editorials on the proposed Interstate 69, which is expected to run through Angelina County.