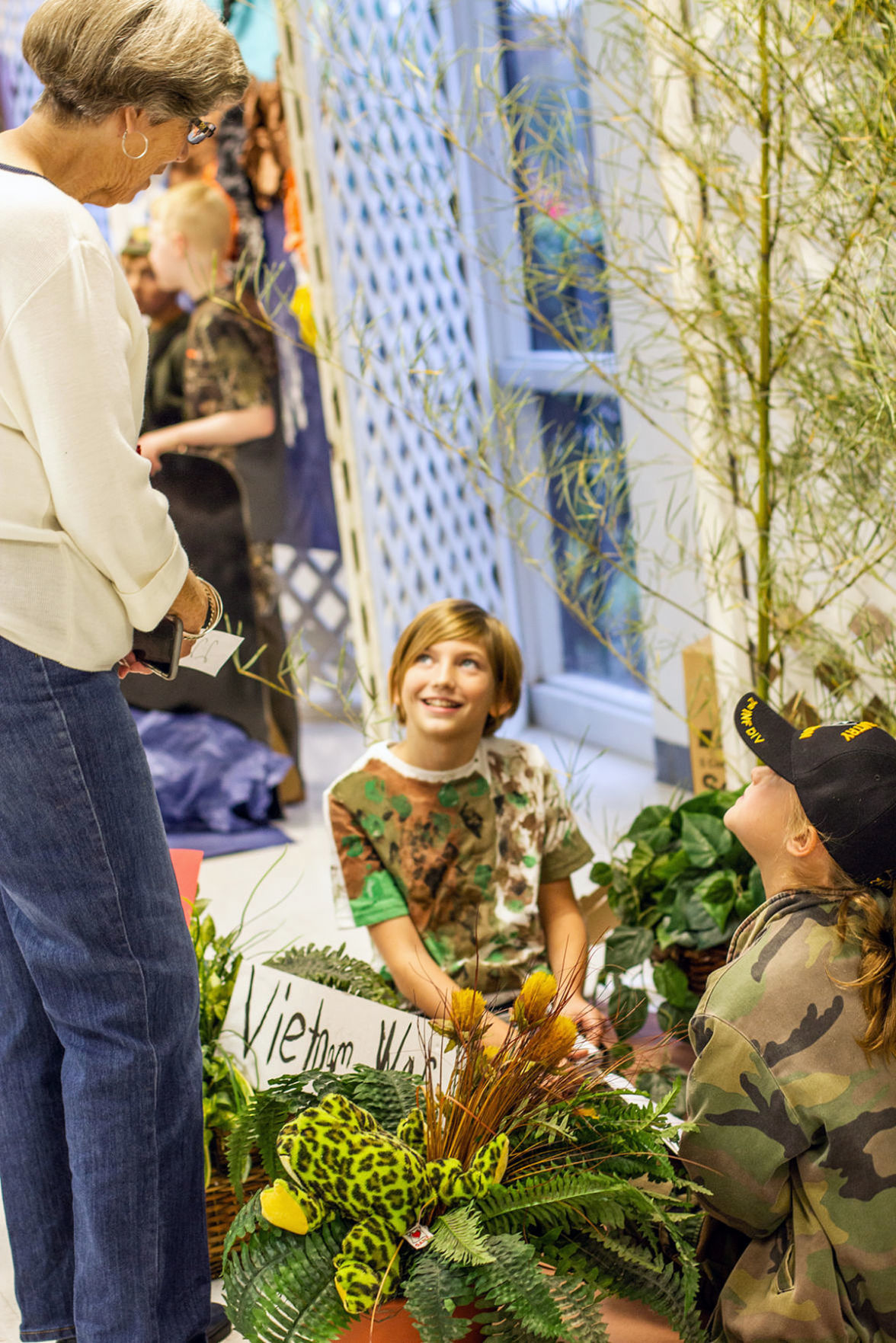 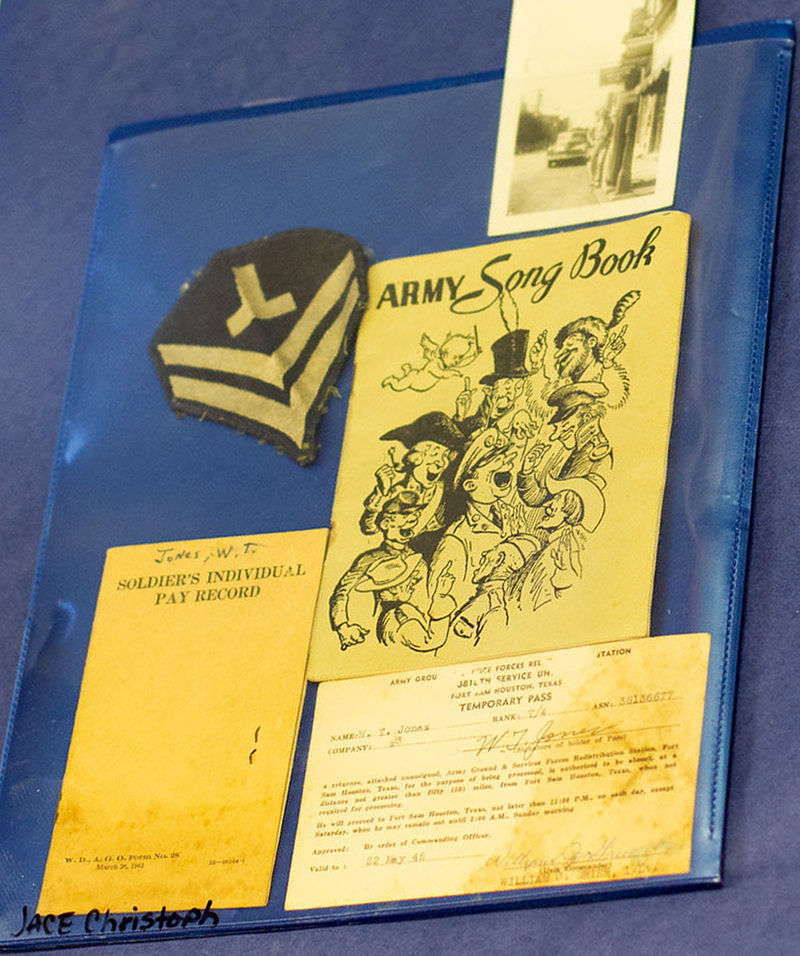 Huntington students spoke about different wars in a live wax museum held before the Veterans Day celebration last week. This folder held memorabilia from World War II at a display on Pearl Harbor. 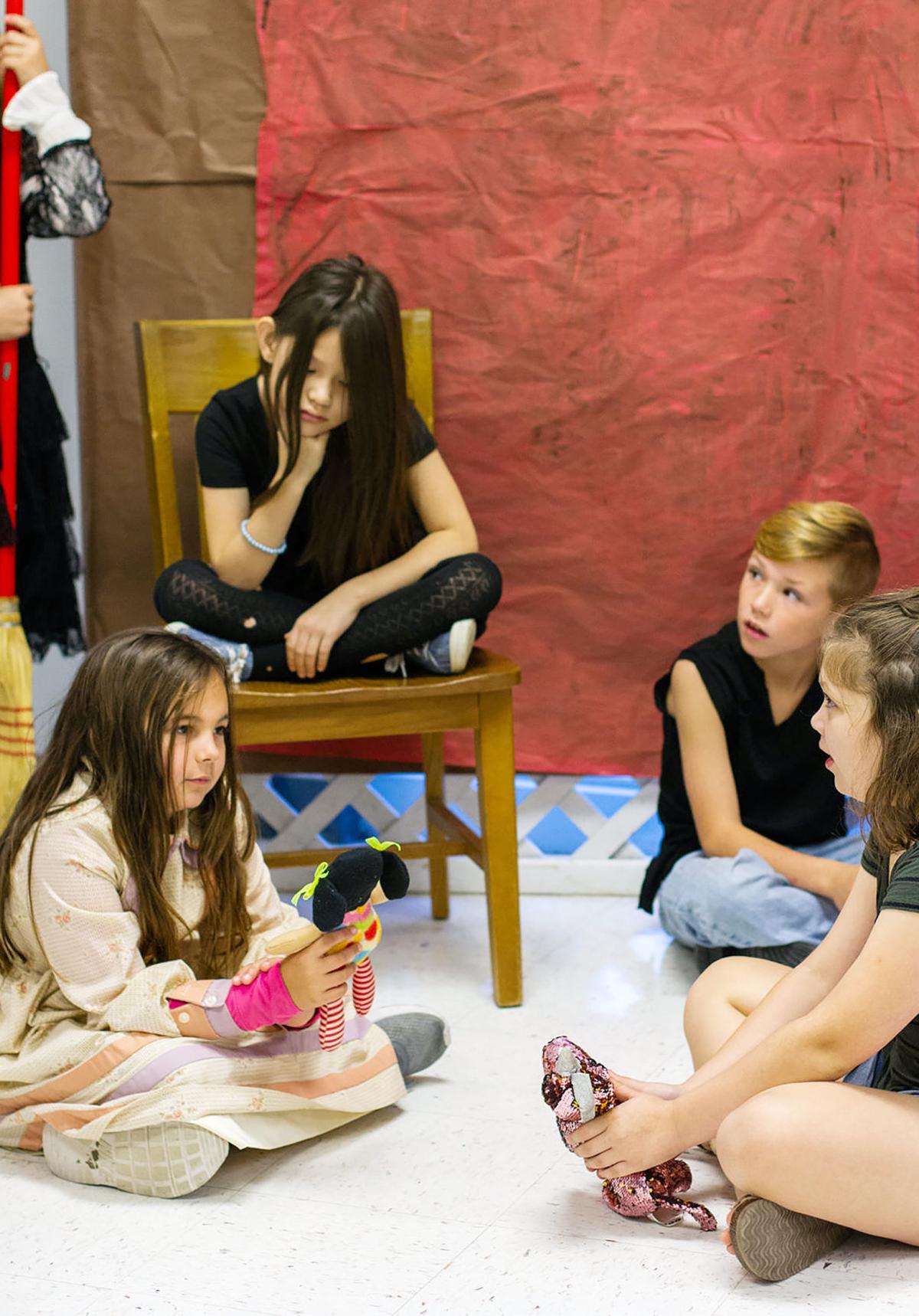 Huntington students spoke about different wars in a live wax museum held before the Veterans Day celebration last week. This folder held memorabilia from World War II at a display on Pearl Harbor.

“Mrs. (J’Nelle) Short does this program every year, and she asked us if we would be interested in a living wax museum,” Kim Teer said. “These are just the wars we hear about from relatives and veterans.”

“I learned that over 3% of the world was killed,” Hayden said. “That feels pretty bad.”

Jace was able to wear dog tags worn by his great-uncle during WWII. He also had a folder with a WWII-era Army song book, a soldier’s individual pay record, a patch and more.

Army veteran Marty Strickland visited the museum to see his grandson. He said he thinks it’s great that the kids do this.

“He’s always asking me questions,” Strickland said. “This is great.”

Ten-year-olds Kaelee Pickett and Stella Davis ran the Vietnam booth. A nurse who served during the Vietnam War visited the girls’ booth, and after they finished telling her what they learned, she told them about her experience.

“It was pretty cool,” Kaelee said. “She said she was a nurse, and she cared for Vietnamese children and Vietnamese citizens. She even cared for North Vietnam prisoners.”

“In the place where she worked, there was a beach, and they would go there at night,” Stella said.

Many of the kids are young enough that they haven’t heard about some of these wars yet, Teer said.

Veteran Glen Pickard served four years of active duty in the Air Force and 17 years in the Army National Guard. He said he thinks it’s great that the school would be willing to host an event like this to honor veterans.

“It teaches patriotism, it teaches history, it lets people know there’s more than average life in the U.S.,” Pickard said. “There’s some folks, 1% of the people in this country, who serve this country every day, 24/7.”

Pickard was a Vietnam veteran, and while he didn’t get the brunt of the mistreatment that some veterans suffered — such as name-calling, being spit on or being pelted by tomatoes — he didn’t get any kind of recognition and was even reticent to put his military service on any job application.

“After 50 or 60 years, he’s finally getting some recognition,” Glen’s wife, Lanita Pickard, said. “We feel welcome here. This is a great tribute, and he just about won’t miss it every year.”

Sorry, there are no recent results for popular articles.

Sorry, there are no recent results for popular images.

Sorry, there are no recent results for popular videos.