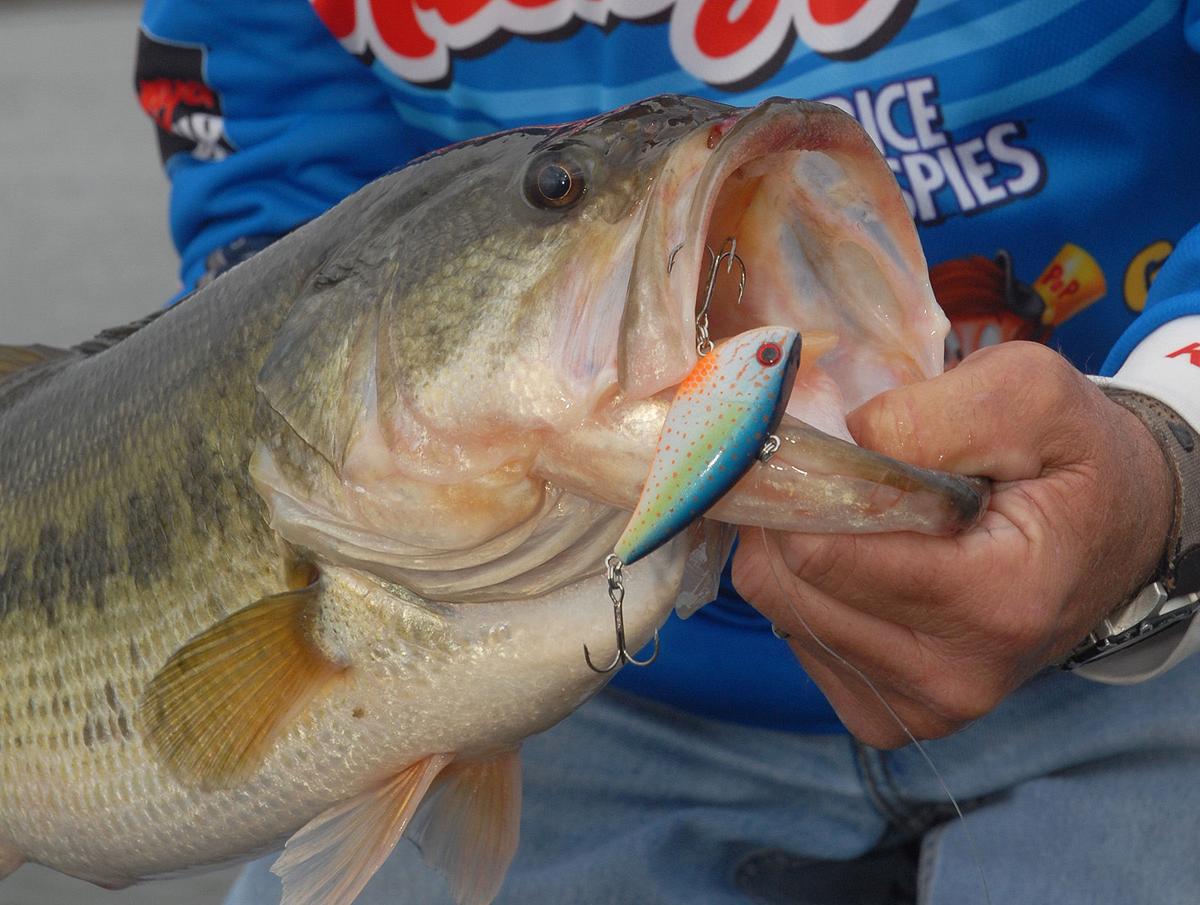 A lipless bait like the Booyah Hard Knocker, pictured here, is a good choice for casting around submerged grass beds during winter and early spring. 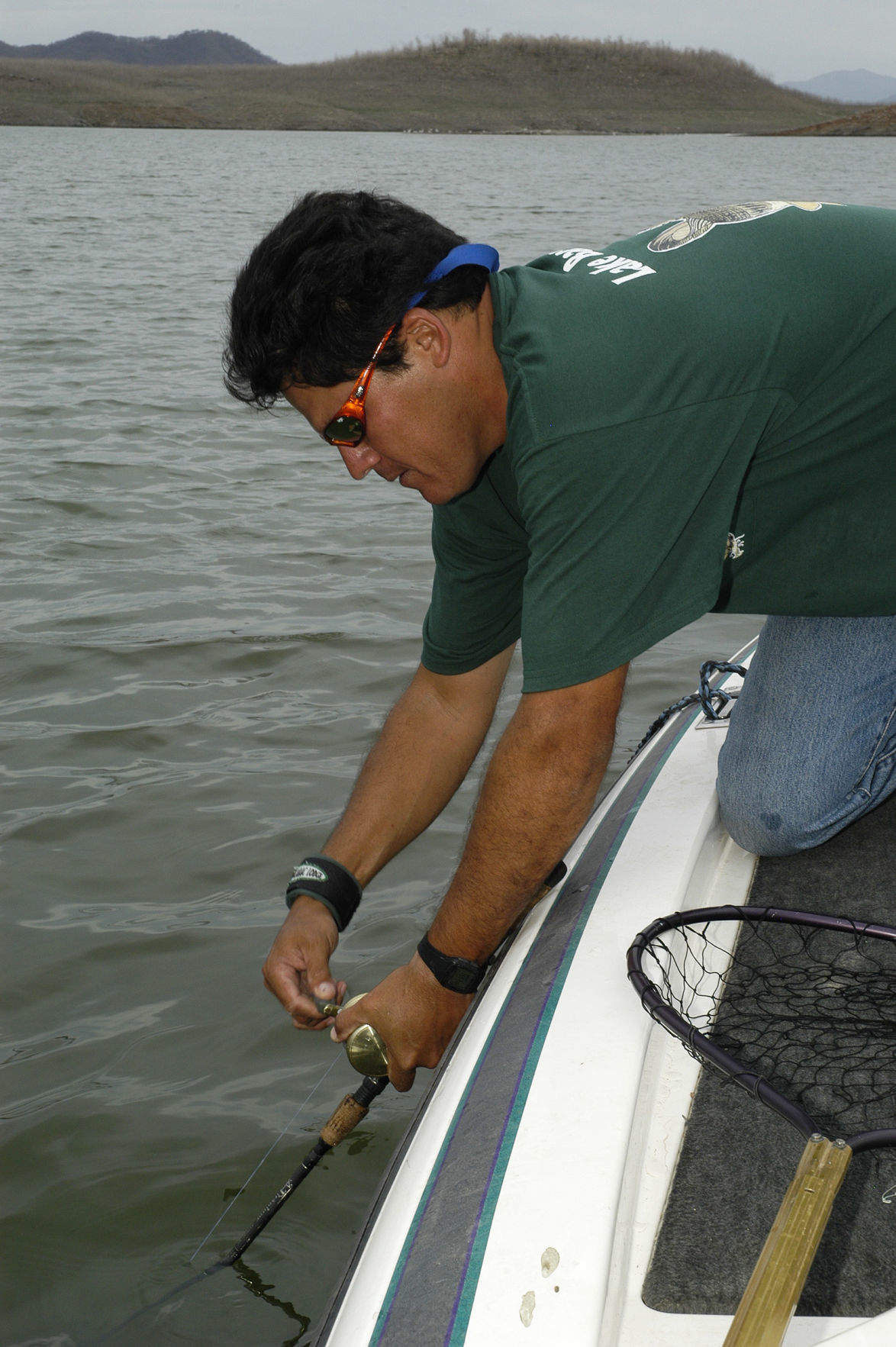 Kneeling and reeling with the fishing rod submerged beneath the surface is a good way to get some extra diving depth out of a crankbait.

Billed crankbaits are equipped with nose lips that cause the lures to dive beneath the surface.

A lipless bait like the Booyah Hard Knocker, pictured here, is a good choice for casting around submerged grass beds during winter and early spring.

Kneeling and reeling with the fishing rod submerged beneath the surface is a good way to get some extra diving depth out of a crankbait.

Plenty of lures will fool a bass, but few allow anglers to cover all the bases like crankbaits do.

To hear Longview bass pro Jim Tutt tell it, heading to the lake without a few crankbaits handy would be like setting out on a cross-country trek without a spare tire for his boat trailer. You might make the trip just fine, but you could have a blowout that leaves you stranded.

“I never go bass fishing without my crankbaits,” Tutt said. “They are extremely versatile in that they allow for covering every depth range from 1 foot to 25 feet. Plus, crankbaits also imitate bass prey better than any other type of bait you can throw. I always have one tied on.”

Tutt has experienced plenty of success with crankbaits over the years. Two of his five wins and several of his nearly three dozen Top 10 finishes on FLW tournament trails are owed to crankin’ plugs of varied styles.

The first win came on Lake of the Ozarks in Missouri, where Tutt used a medium-diving Storm Wiggle Wart to grab a $67,000 pay day. The key was glancing the bait of chunk rock and boulders in about 3-8 feet of water.

The second victory came on Sam Rayburn Reservoir. There, Tutt relied on a Bill Lewis Rat-L-Trap to pluck nearly 62 pounds of bass off submerged hydrilla beds in water ranging from 2-4 feet deep. That win was worth $55,000.

The 59-year-old pro got another dose of crankbait magic last January when he racked up a fifth-place finish in the FLW Tour opener on a rain-swollen Sam Rayburn. Tutt did the most damage with a medium-diving lure from Berkley called the Bad Shad in a red craw pattern. He targeted the seam between underwater hay grass and hydrilla beds in 6-8 feet to catch as many as 70 bass per day over the course of the four-day event. His earnings totaled $19,000.

The tournament winner on ’Rayburn, Terry Bolton, of Paducah, Kentucky, also relied heavily on cranking plugs to grab the $125,000 first-place purse. His arsenal included a series of deep diving lures from Rapala — a DT10, DT14 and DT16. He used the lures to reel in more than 91 pounds of bass. Bolton said the fish were positioned around underwater drains and grass lines in water ranging from 12-18 feet deep.

While crankbaits may not be a remedy for every fishing situation, they are great tools for covering varied water depths, simulating all sorts of tasty forage and for triggering “reaction” strikes when other lure styles aren’t getting it done.

Here is a crash course in crankbait styles and some advice for using them.

Some crankbaits are equipped with a bill that extends at a downward angle off the nose, which causes the lure to dive. Others don’t have a bill. The latter are described as lipless baits.

Going lipless: The lipless family includes popular models like the Rat-L-Trap, Rattlin’ Vibe or Red Eye Shad. Some anglers call lipless lures “idiot baits,” because they are so elementary to fish with. Just chunk it. Wind it. Hold on tight.

The lipless crankbait is flat-sided and does not float. Its elongated body is usually filled with small BBs to create a distinctive rattling noise as it speeds through the water column with a tight wiggle. It is available in sizes ranging 1/4 to 1 ounce; 1/2 and 3/4 ounce are the most popular sizes.

Lipless cranks will catch bass year-round but are especially effective when worked over submerged grass during winter and early spring. The key is to work the bait fast enough to keep it ticking the top of the grass; most strikes occur as it tears free.

It’s also a great choice when targeting school bass in summer or fall or white bass during the spring spawning run. The lipless bait does a good job of simulating shad. Plus, it casts like a bullet so you can reach spooky school fish without getting too close.

Give ‘em some lip: Lipped crankbaits are broken down into three groups based on how deep they dive in the water column. The baits come in assorted sizes and are generally classified in three diving ranges — shallow divers, medium divers and deep divers.

The bill creates resistance as the bait moves through the water, thus causing it to dive. The longer and wider the bill, the deeper the bait will go; the shorter the bill, the shallower a bait dives.

The lip on a crankbait also influences its wobbling action while helping it to defect off of stumps, brush, rocks and other underwater obstructions. Most lipped crankbaits float when idle. Pausing the retrieve when the bait contacts brush or grass will often times allow the bait to float free before it snags.

The shape of the body also can impact a bait’s action. Crankbaits with rounder, fatter bodies will usually have a wider, more pronounced wobble than one with flat sides. Most crankbait junkies prefer baits with a wide wobble when water temperatures are warm and the fish are more aggressive; baits with tighter wiggle usually work best in cold water when the fish aren’t as willing to chase.

One of the more popular crankbait styles for shallow fishing in winter and spring is the square bill. The lip is squared off rather than rounded. This helps the bait bounce off hard objects and causes a unique “hunting” action when it flutters left or right.

Not all lipped crankbaits are created equal when it comes to diving depth. Shallow divers are designed to cover water depths in the 1-5 foot range, medium divers, 6-12 feet, and deep divers, 12-20 feet and beyond. Most manufacturers will list diving ranges on packages for quick reference.

It is always best to use a crankbait that is best suited for the water depth while taking into account the type and amount of cover or structure that might be below the surface. To wit:

Let’s say the water depth is eight feet, but hydrilla is going 4-5 feet off off the bottom. A shallow diver is probably going to be the better choice. That’s not to say a medium diver wouldn’t work, but some adjustments might be in order to compensate for the cover you can’t see.

There are several ways to alter the diving depth of a crankbait:

Rod angle and retrieve speed: Raising or lowering the rod angle can make a noticeable difference. Positioning the rod at 2 o’clock and slowing down the speed of retrieve will make the lure run significantly shallower than placing the rod at 5 o’clock and really grinding on the retrieve.

Kneel and reel: This means getting on your knees and poking the rod beneath the surface to get more diving depth out of a lure. Offshore cranking specialist Paul Elias, of Laurel, Mississippi, popularized this tactic when he used it to win the 1982 Bassmaster Classic on the Alabama River.

Line changes: Maximum diving depth is achieved using small diameter lines like an 8-10 pound test. Swapping to a larger diameter line will cause a bait to run shallower.

Crankbaits are like cars and trucks. There are lots of pretty paint jobs out there. Just don’t be suckered by flashy colors.

The best crankbait colors are those that simulate the predominant forage species available in a given reservoir system. It’s called “matching the hatch.”

Shad, sunfish and crawfish are the primary sources of food for bass on Texas lakes. Stick with standard color combinations, including chrome, pearl, silver, chartreuse, green, yellow, brown, orange or red and you can’t go wrong. Crawfish colors always get the highest marks in winter and spring.

Productive colors can vary from one day to the next, even on the same lake.

Sometimes just changing to a slightly different color can mean the difference in getting bit or not.

There is no such thing as silver bullets in bass fishing, but crankbaits will sometimes catch fish when everything else seems to fail. The results might seem magical at times.

Matt Williams is a freelance writer based in Nacogdoches. He can be reached by email at mattwillwrite4u@yahoo.com.