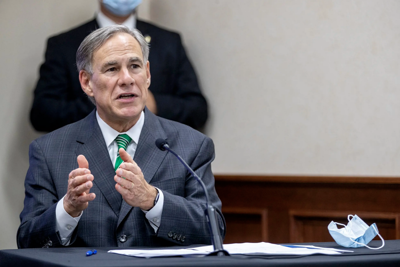 Gov. Greg Abbott issued a nearly statewide mask mandate Thursday as Texas scrambles to get its coronavirus surge under control.

The order requires "all Texans to wear a face covering over the nose and mouth in public spaces in counties with 20 or more positive COVID-19 cases, with few exceptions," according to Abbott's office.

Abbott had previously resisted calls for such a statewide requirement but allowed local governments to require businesses to mandate masks.

Abbott on Thursday also banned certain outdoor gatherings of over 10 people unless local officials approve. He had previously set the threshold at over 100 people. The new prohibition also goes into effect Friday afternoon.

Abbott's latest moves come ahead of Fourth of July weekend, which has raised concerns about larger-than-usual crowds gathering while the state grapples with the virus spike.

This is Abbott's latest set of moves aimed at trying to get the virus surge under control in Texas. Six days ago, he ordered bars closed and reduced the permitted restaurant occupancy to 50%, among other things.

This developing story will be updated.

"Gov. Greg Abbott orders Texans in most counties to wear masks in public" was first published at texastribune.org/2020/07/02/texas-mask-order-greg-abbott-coronavirus/ by The Texas Tribune. The Texas Tribune is proud to celebrate 10 years of exceptional journalism for an exceptional state.