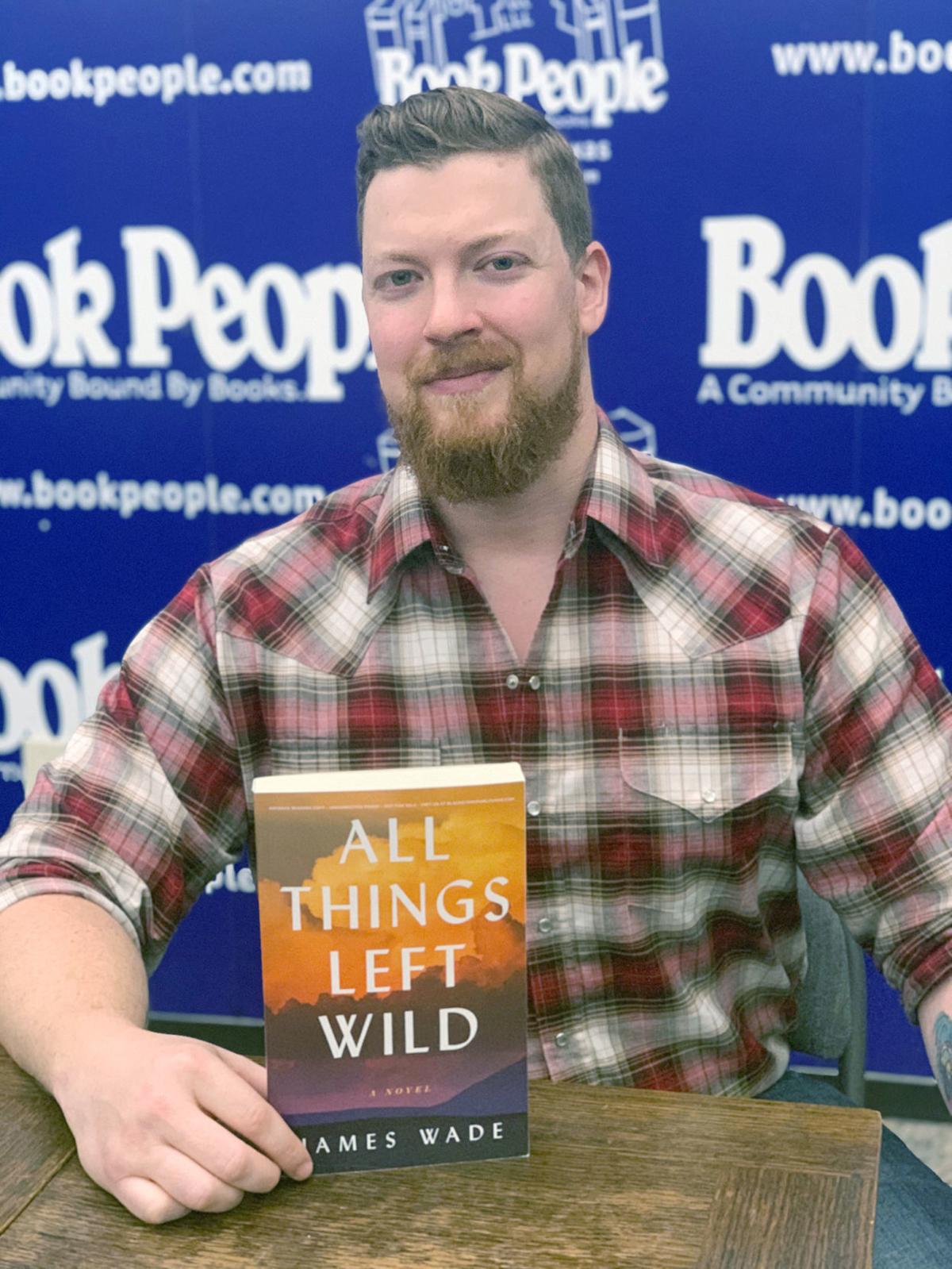 James Wade shows off the cover design of “All Things Left Wild” while speaking on a Writers’ League of Texas panel at BookPeople in Austin. 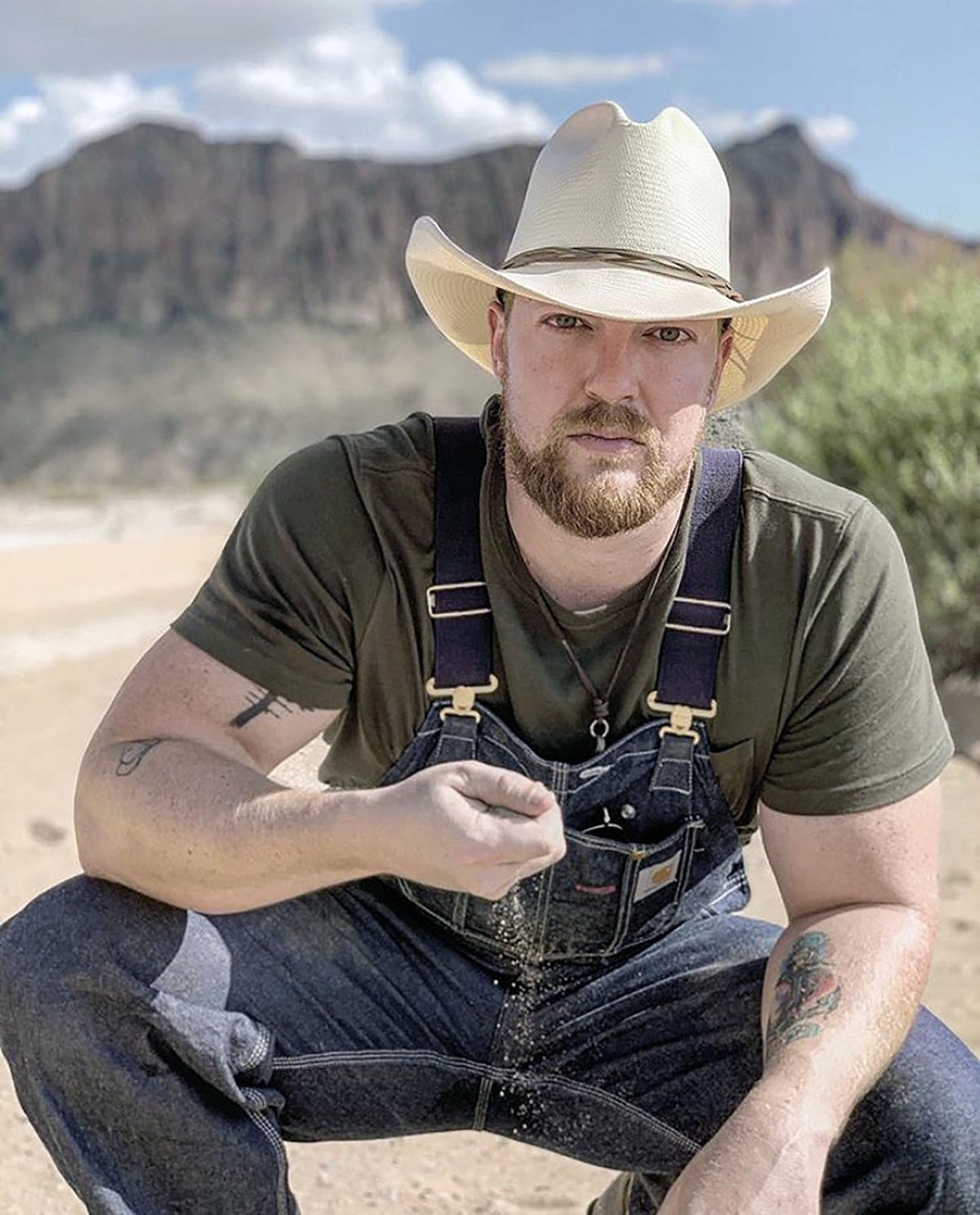 Much of James Wade’s novel takes place in Southwest Texas, where he and his wife Jordan own land near the U.S./Mexico border. 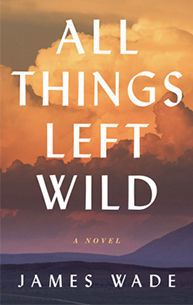 James Wade signed a three-book deal with Blackstone Publishing last spring. He expects his next two novels to be released in 2021 and ’22.

James Wade shows off the cover design of “All Things Left Wild” while speaking on a Writers’ League of Texas panel at BookPeople in Austin.

Much of James Wade’s novel takes place in Southwest Texas, where he and his wife Jordan own land near the U.S./Mexico border.

Lufkin High School graduate and former Lufkin Daily News reporter James Wade’s debut novel, “All Things Left Wild,” is set for release June 16, and if the praise rolling in from from his peers is any indication, fans of Western literature are in for one brilliantly painted ride.

“As a southerner, the very first sentence wove such a familiar and comforting tapestry, and it never let up,” said Corey Ryan Forrester, comedian and author of “The Liberal Redneck Manifesto.”

“Wade presents rich, flawed, human characters who I feel I know personally even though I’m neither of their time or place.”

Currently living in Austin with his wife Jordan and their newborn daughter Juniper, Wade — better known as Nick here in his hometown — took a gamble on his talents at Jordan’s urging two years ago by quitting his job, buying an RV they named “Betty,” and taking the two off on a journey around the country while he penned what would eventually become the first novel in a three-book deal with Blackstone Publishing. And their travels out West would prove to be instrumental to the luscious setting of his book.

“The trip was essential to the landscape,” Wade said in an email interview. “Opening the door each morning to see the desert or the mountains, it instantly created an atmosphere that I tried to transfer onto the page. But even if I hadn’t have written the novel during the trip, that experience would still be one of the best decisions of my life.”

In “All Things Left Wild,” an attempted horse theft goes tragically wrong, leaving 16-year-old Caleb Bentley on the run with his mean-spirited big brother across the American Southwest at the turn of the 20th century. Caleb’s moral compass and courage are tested along the way as the brothers travel the harsh terrain and encounter those who have forged a life there — for good or for ill.

Meanwhile, wealthy and bookish Randall Dawson, out of place in the rugged and violent region, is begrudgingly chasing the brothers. With little notion of how to survive, much less how to exact his revenge, Randall encounters Charlotte, a woman experienced in the deadly ways of the West, and together they navigate the blurred values of vigilante justice.

A book described as powerful, atmospheric, lyrical and fast-paced by critics, “All Things Left Wild” is a coming-of-age for Caleb, a midlife odyssey for Randall, and an illustration of the violence and corruption prevalent in the rapidly expanding country of that time.

“It artfully sketches the magnificence of the American West as mirrored in the human soul,” reads a press release from Blackstone.

“James Wade has delivered a McCarthy-esque odyssey with an Elmore Leonard ear for dialogue,” said David Joy, author of “When These Mountains Burn.”

“‘All Things Left Wild’ moves like a coyote across this cracked-earth landscape — relentlessly paced and ambitiously hungry.”

Comparisons like those are surely music to the ears of Wade, who lists “Faulkner, Baldwin, Flannery O’Conner, to name a few” as among the writers who most influenced his style.

“I believe Cormac McCarthy is the best writer who ever lived, and I believe it isn’t much of a competition. In some way, everything I read influences me, but I will always strive for McCarthy-level prose, despite knowing that’s an impossible standard to meet.”

But Wade also credits a few people right here in Lufkin with his knack for the written word. He’s also devoted a lot of time to advocating for public education — in large part due to what he calls the “tremendous experience” he had at LHS.

“My English teachers, Allison Hillis and the late, great John Mitchell, were both so kind to me when I was an arrogant kid who talked about wanting to be a writer. They, along with my mother, Dorinda — who is the principal at Dunbar Primary — fostered that early enthusiasm for literature which proved to be a game-changer later in life.”

Hometown readers will even find a wink in the book that nods to his Lufkin roots (the bad guys are called The Lobos), but “nothing so blatant as that one — Go Pack!” Wade said.

“But there is a scene late in the story, where one of the characters is riding around a big lake in East Texas that geographically would have to be Sam Rayburn. However, the year is 1913 or 1914, and Sam Rayburn Reservoir didn’t exist until 50 years later. It’s a good thing I write fiction.”

It’s a good thing in more ways than one, as Wade himself will be the first to admit he wasn’t really cut out for the 9-to-5 work world.

“That’s something that’s interesting — or maybe the better word is terrifying — about writing. You never know when the clock might strike midnight and it’s time to find a ‘real’ job again,” he said. “A lot of authors face that after they publish their first novel. If it doesn’t sell well, they may be yanked out of this dream almost as soon as it begins.”

He goes on to note that while thousands of authors publish books each year, there are very few financial success stories to be found.

“I know several excellent writers who still have day jobs to pay the bills. I’m fortunate that Blackstone Publishing signed me to a three-book deal, but there is always the looming dread of what happens when that contract is up, because at this point I’m ruined for office work — not that I was ever any good at it.”

While the COVID-19 pandemic scrapped a lot of plans for launching his debut novel — almost all of the conferences, festivals, book store readings and other events were canceled or moved online — Wade just feels blessed that his family has remained healthy.

“My wife and I are incredibly lucky to not have to worry about many of the issues this pandemic has brought to the forefront, so it’s been relatively easy to let go of certain images I had about releasing my first book.”

And it helps that the book has been so well received.

“All the authors who appear on the book jacket were so kind in their praise — and just their taking the time to read the book in the first place,” Wade said, “Those folks are all successful writers, with a handful of awards and bestsellers to their names, so I was just floored to have them agree to do that. But my favorite line was from a reader who left a review on Goodreads saying the novel ‘will make you feel and make you think.’ I love that, because those two things are the primary goals when I sit down to write.”

But an even bigger thrill for Wade was the birth of his daughter Juniper in May, after what he described as a “bizarre journey” to have a baby during a pandemic, especially for Jordan.

“She had to tackle the toughest months of pregnancy under a pandemic lockdown,” he said. “She wasn’t able to have a baby shower or have friends and family there to support her. She was also stuck with me the whole time, which is arguably worse than labor. But she was so amazing through the entire process, and if our daughter is anything like her, she’ll turn out just fine despite her dorky dad.”

Wade’s second novel, “River, Sing Out,” is a coming-of-age story that takes place in the Neches River bottoms in East Texas. The present-day tale follows a young boy who tries to help a teenage girl escape a dangerous situation. The third novel, currently titled “Narrow the Road,” centers around a string of murders near a West Texas cattle ranch at the onset of World War II. Both books are written and have been submitted to his publisher, but Wade doesn’t expect the second novel to release until the summer of 2021 and the third until the following summer.

Pre-orders for “All Things Left Wild” are already available through Amazon, Bookshop.org and anywhere else books are sold, but Wade encourages East Texas bookworms to pre-order through Absolutely Fiction in Lufkin or The Bosslight book store in Nacogdoches to support independent and locally owned businesses.

“When people ask where I’m from, I say Lufkin. I’ve lived in Austin for almost a decade, but it still feels like I’m just spending time somewhere away from home. So many people in East Texas have supported and encouraged me, and I can’t wait to find a safe and appropriate time to hold a reading in Lufkin.”

Regardless of how well the book sells, Wade is quick to emphasize what a privilege it’s been for him to devote the last few years of his life to exploring America while pursuing his passion of writing.

“To be able to do something I truly love, with the person I care about most by my side, is such an immeasurable joy.”