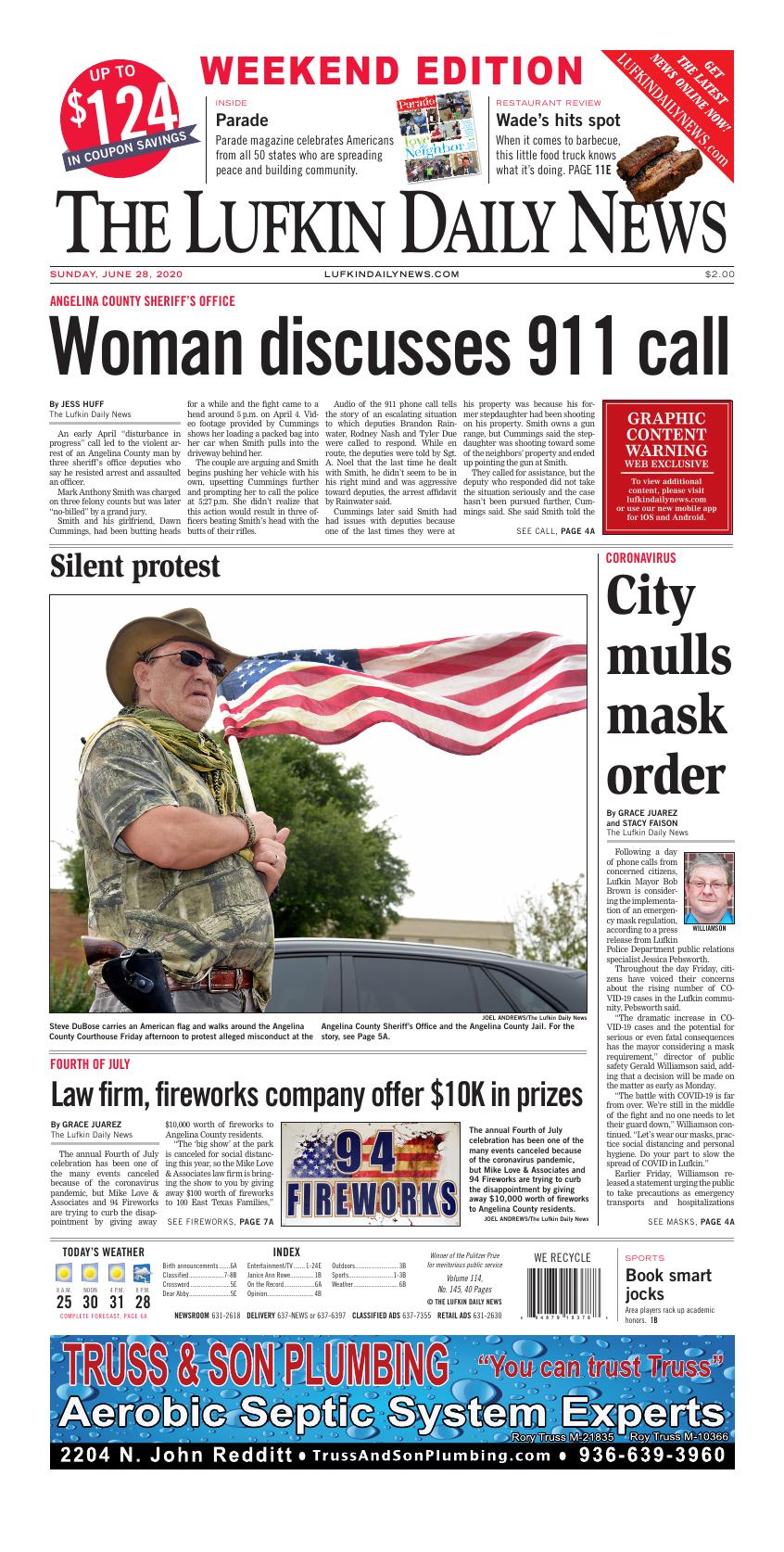 An early April “disturbance in progress” call led to the violent arrest of an Angelina County man by three sheriff’s office deputies who say he resisted arrest and assaulted an officer.

Mark Anthony Smith was charged on three felony counts but was later “no-billed” by a grand jury.

Smith and his girlfriend, Dawn Cummings, had been butting heads for a while and the fight came to a head around 5 p.m. on April 4. Video footage provided by Cummings shows her loading a packed bag into her car when Smith pulls into the driveway behind her.

The couple are arguing and Smith begins pushing her vehicle with his own, upsetting Cummings further and prompting her to call the police at 5:27 p.m. She didn’t realize that this action would result in three officers beating Smith’s head with the butts of their rifles.

Audio of the 911 phone call tells the story of an escalating situation to which deputies Brandon Rainwater, Rodney Nash and Tyler Due were called to respond. While en route, the deputies were told by Sgt. A. Noel that the last time he dealt with Smith, he didn’t seem to be in his right mind and was aggressive toward deputies, the arrest affidavit by Rainwater said.

Cummings later said Smith had had issues with deputies because one of the last times they were at his property was because his former stepdaughter had been shooting on his property. Smith owns a gun range, but Cummings said the stepdaughter was shooting toward some of the neighbors’ property and ended up pointing the gun at Smith.

They called for assistance, but the deputy who responded did not take the situation seriously and the case hasn’t been pursued further, Cummings said. She said Smith told the deputy to get off his (expletive) property.

Online county records list 10 times they’ve been to Smith’s property since 2013. Cummings said nine of them were times that Smith has called for help. Deputies have been called out there for a patrol request, twice for a criminal trespass, twice for harassment which Cummings said involved Smith’s stepchildren, fraud, and twice for a disturbance — which includes the incident in April and the incident with Smith’s stepdaughter.

Cummings said the allegation of 28 calls or even more than 40 calls were untrue. The Lufkin Daily News is awaiting the response from an open records request detailing the number of calls to the residence.

Noel cautioned the deputies and warned them that Smith owned several weapons.

Smith owned a gun store for years, builds his own weapons and ammunition and helped train deputies when Sheriff Kent Henson was in office, Cummings said.

She called the emergency line because other times that she’s called the non-emergency line, she’s just been sent to their 911 dispatchers. She said she just wanted someone to help her get her car moved and to talk Smith down.

“My boyfriend, he’s got me backed in or trapped in so I can’t move my car, he’s got his truck up against my car and he won’t move,” Cummings said. “He’s been drinking. I’m just trying to leave so I can go to Mother’s.”

Cummings told The Lufkin Daily News she isn’t — and wasn’t — scared of Smith, although she told the dispatcher 8 minutes into her 911 call that he was really starting to scare her.

Cummings identified herself as Dawn Krantz in the call. Smith can be heard outside her vehicle yelling at her and hitting the window. In the video, Smith is seen slamming his hand against the driver’s side window.

Smith begins pushing Cummings’ car again with his truck. Audio of him pushing against Cummings’ vehicle can be heard in the 911 call. At 4:28, she tells the dispatcher he’s trying to break her window and a pounding sound can be heard. He then goes inside.

At minute 5, she said Smith shouldn’t have anything on him, that he’s just drunk, and that “when he gets like this he gets very agitated and I don’t like to be around him. I’m just trying to just go to my mom’s until he can sober up and be himself again.”

She said that he left his truck behind hers where she couldn’t move.

Cummings told The Lufkin Daily News later that Smith grabbing his gun wasn’t unusual behavior. He has a legal gun range on his property and he will go out there to shoot when he gets aggravated as a way to de-stress.

Cummings was asked if she can get to safety and she said that she’s just in her car with the door locked. Cummings asked if she could get in his truck and move it.

At 6:50, Cummings tells the dispatcher that Smith put the gun up, but at 6:56 she says she doesn’t know if he has a gun inside his shirt or not, but that she doesn’t think he does.

She told the dispatcher that she has her own guns in the house and she wants them before she leaves.

At minute 8, she tells the dispatcher that Smith is really beginning to scare her now, and at 8:15 she said, “I just want him to stop,” through what sounds like tears.

Smith can be heard yelling at Cummings and she responds with, “You’re drunk,” and then tells the dispatcher he said something about getting a “baby gun” but that it’s fine because the deputies arrived.

At 9:26, some indiscernible yelling can be heard in the background and Cummings tells the dispatcher that Smith will fight the deputies.

Thumps can be heard and another round of shouting before Cummings begins crying and asking the deputies not to hurt him.

For the next few minutes Cummings can be heard screaming, crying and begging the deputies not to hurt Smith while deputies yell at Smith to get on the ground.

Fragments of sentences and words can be heard on the 911 call from the scuffle.

After Smith was handcuffed and no longer moving, Cumming’s video evidence shows him remaining face-down in the mud for 22 minutes before an ambulance arrived. The video shows one deputy — although it isn’t clear which one — taking a photo with what looks like a cellphone and then later another deputy can be seen taking photos with what looks like a point-and-shoot camera.

At least eight officers can be counted roaming the front property of Smith’s house in the 22 minutes he lay there. Cummings said they’ve been giving information on this case to the state and believe that it is being more thoroughly investigated.

The grass where Smith laid has since died and won’t grow back. 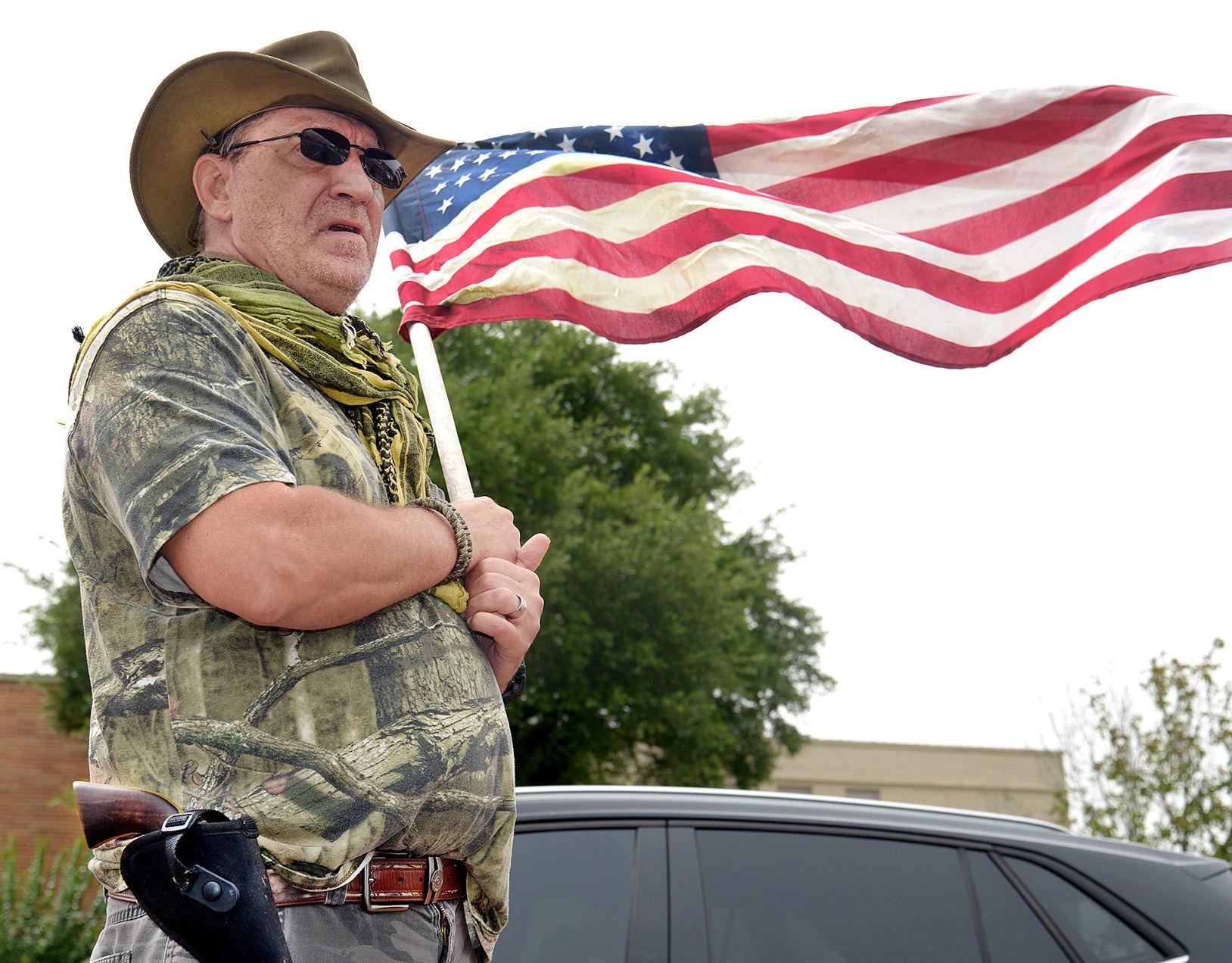 The annual Fourth of July celebration has been one of the many events canceled because of the coronavirus pandemic, but Mike Love & Associates and 94 Fireworks are trying to curb the disappointment by giving away $10,000 worth of fireworks to Angelina County residents.

The annual Fourth of July celebration has been one of the many events canceled because of the coronavirus pandemic, but Mike Love & Associates and 94 Fireworks are trying to curb the disappointment by giving away $10,000 worth of fireworks to Angelina County residents.

“The ‘big show’ at the park is canceled for social distancing this year, so the Mike Love & Associates law firm is bringing the show to you by giving away $100 worth of fireworks to 100 East Texas Families,” the entry website reads. “We may have to wait until 2021 before we can light up the entire East Texas sky again, but we can still celebrate this great country with family and friends.”

East Texas families can sign up to win a $100 firework voucher from 94 Fireworks in Hudson by providing their name, phone and email. Only one entry is allowed per person, and entries are due by Monday.

The big show has been provided by the law firm for more than 20 years. Mike Love said it began out of his love and fond memories of the annual July 4 fireworks show at Ellen Trout Park.

“In 2006, it had been four or five years since Lufkin had a July 4 fireworks show and the law firm really wanted to do whatever we could to help get it going again,” Love said. “As luck would have it, when we started the process in February 2006, every pyrotechnic company in the southern United States was already booked for July 4, but a Louisiana company offered to send us through their training program so that we could do the show on our own.”

So Love and other employees at the firm attended training, took state tests and purchased their own custom firing system. After assisting with six smaller firework shows in preparation, they were ready to host the show in Lufkin and revamp an old tradition.

“Over the years, July 4 has become our favorite community event,” Love said. “It is an amazing opportunity to bring the community together and to reflect on the blessings we have in this country and all the people that have come and gone before us to make that happen.”

While the decision to cancel this year’s celebration was a disappointment to the firm, Love said he understands why the city chose to do so and knew the city did not make the decision lightly.

Love said they wanted to host the contest to demonstrate that, while COVID-19 can “push our comfort zone, it can’t hold us down.”

“If life closes a window, open a door,” he said. “We might not be able to have the big show at the park, but we can still get together in smaller groups of friends and family and that can be just as special. The law firm wanted to be able to help in that process.”

Reece Maddox, owner of 94 Fireworks, said he wanted to be able to give back to the community and to encourage people to visit his shop through this partnership with the law firm.

“We’ve had a few people come through already with their gift certificates,” Maddox said. “Yesterday, some parents and a little boy came through. Normally, the little kids will try to pick out stuff, and the parents will go, oh, you know, because it gets expensive, but that boy came in and he got to pick out whatever he wanted with his gift card. That was pretty cool.”

Winners will continue to be drawn through Tuesday. To enter the contest, visit texaslawoffice.com/fireworks-extravaganza/.

“We have been through tough times before and ‘this too shall pass,’” Love said. “We hope everyone has a safe and fun July 4 with friends and family, and we are looking forward to the biggest fireworks show and the biggest crowds ever for July 4, 2021!”

Following a day of phone calls from concerned citizens, Lufkin Mayor Bob Brown is considering the implementation of an emergency mask regulation, according to a press release from Lufkin Police Department public relations specialist Jessica Pebsworth.

Throughout the day Friday, citizens have voiced their concerns about the rising number of COVID-19 cases in the Lufkin community, Pebsworth said.

“The dramatic increase in COVID-19 cases and the potential for serious or even fatal consequences has the mayor considering a mask requirement,” director of public safety Gerald Williamson said, adding that a decision will be made on the matter as early as Monday.

“The battle with COVID-19 is far from over. We’re still in the middle of the fight and no one needs to let their guard down,” Williamson continued. “Let’s wear our masks, practice social distancing and personal hygiene. Do your part to slow the spread of COVID in Lufkin.”

Earlier Friday, Williamson released a statement urging the public to take precautions as emergency transports and hospitalizations continue to rise in Angelina County.

Currently, Lufkin Fire paramedics are seeing an average of six transports related to COVID-19 per day. In May, those stats were at only one a week, he said.

Williamson said while the county (reported by the health district) has remained at six deaths for the past couple of weeks, city officials are being told by “health care sources” of two additional deaths that are being evaluated as COVID-19 related. 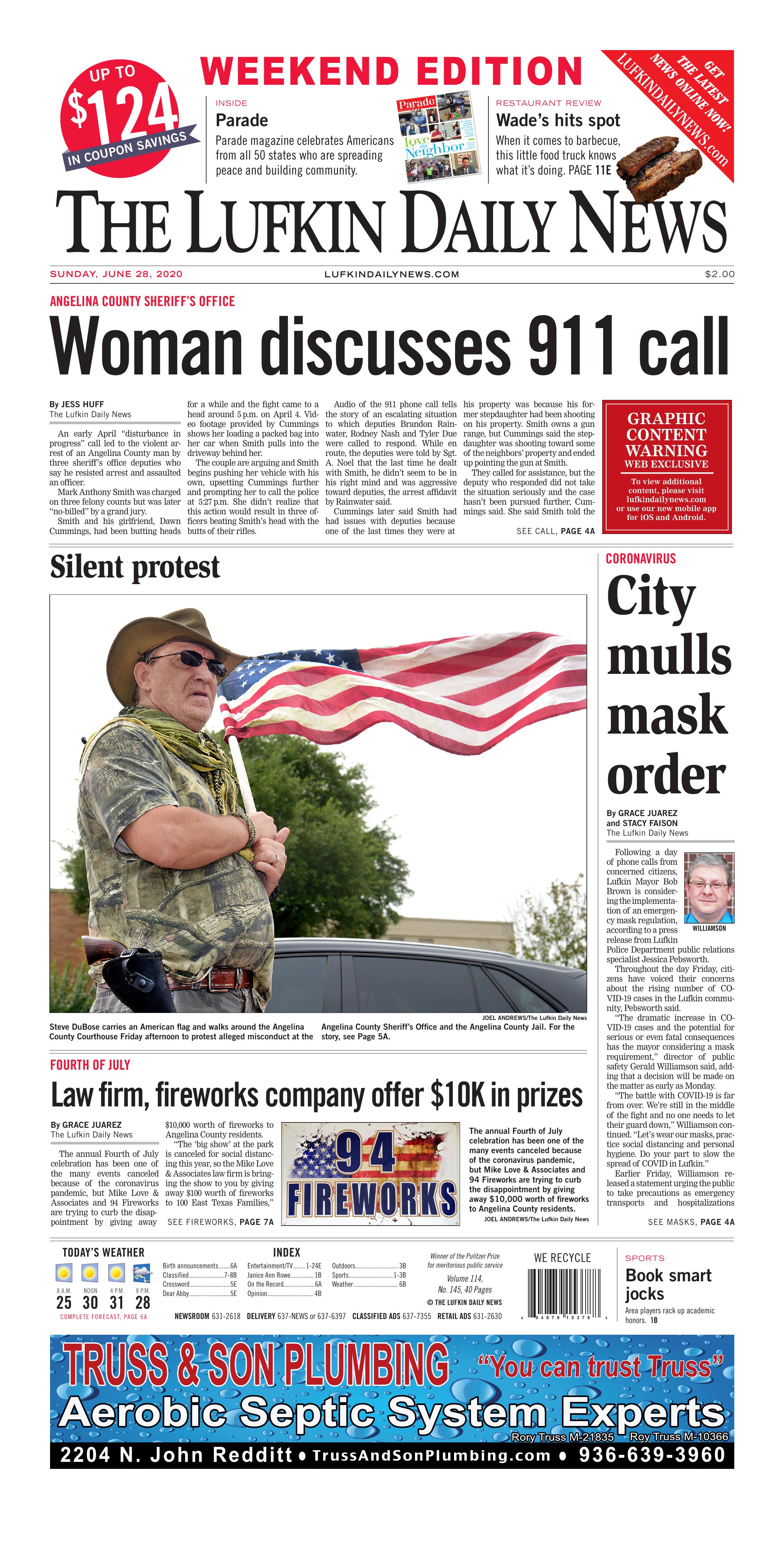