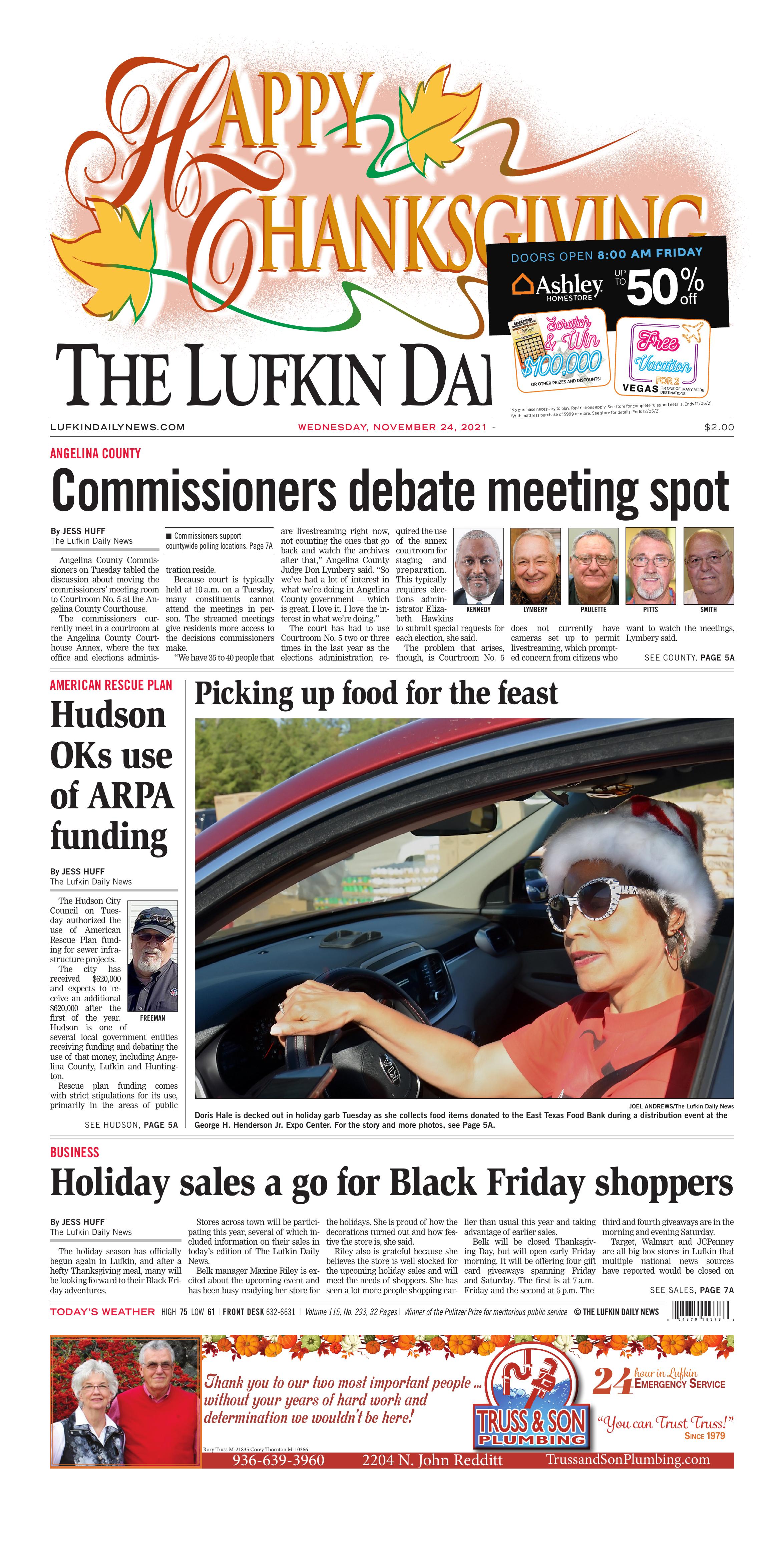 The commissioners currently meet in a courtroom at the Angelina County Courthouse Annex, where the tax office and elections administration reside.

Because court is typically held at 10 a.m. on a Tuesday, many constituents cannot attend the meetings in person. The streamed meetings give residents more access to the decisions commissioners make.

The court has had to use Courtroom No. 5 two or three times in the last year as the elections administration required the use of the annex courtroom for staging and preparation. This typically requires elections administrator Elizabeth Hawkins to submit special requests for each election, she said.

The problem that arises, though, is Courtroom No. 5 does not currently have cameras set up to permit livestreaming, which prompted concern from citizens who want to watch the meetings, Lymbery said.

“When we do have a court over at Courtroom 5, there are a lot of people calling, my phone lights up — what are we trying to get passed without making it public?” he said. “We’re not trying to hide anything, but we don’t have any equipment over there for the livestream. That creates a problem.”

Lymbery brought the issue before the court in an attempt to quell concerns about commissioners hiding something in the meetings that were not livestreamed. He wants to move into Courtroom No. 5 permanently, which would permit the county to install the equipment for the livestream, ensuring constituent access to meetings.

Commissioners Terry Pitts and Steve Smith both expressed concerns about the move. Smith had a few concerns in particular and said as he got deeper and deeper into it, he did not like the idea.

Smith is concerned about where the public would go in the event of an executive session. They would be required to go outside into the breezeway.

“It’s not standing in the rain but it is in the outside temperatures,” Lymbery said.

He was concerned about restroom access. Lymbery said there is a restroom that would have to be made accessible and a guard placed there, but he did not anticipate that being an issue.

“We would have to make arrangements to open the door for them,” he said. “We can do that. We’ll have the guard there, just like we do here.”

Hawkins said she wants to use the area for storage and as a staging area ahead of elections. Having the space already dedicated for this work would stop her from having to always ask for the space and it would give her a secure location for the equipment.

“At this point, we would do a lot of our preparation in there,” she said.

If the court doesn’t approve this measure, she will continue to request the space ahead of each election and commissioners will have occasional meetings at Courtroom No. 5 but with no equipment.

Pitts is worried about parking around the courthouse, especially as courts resume trials, and the impact on the court system in general. Courtroom 5 is typically used to host visiting judges for the most part now, he said.

Lymbery said this would not be an issue and that he had spoken to several judges and people at the courthouse and they are all for the idea, he said. He spoke to District Judge Bob Inselmann Tuesday morning, and the judge was all for it, Lymbery said.

Pitts also was worried the move might leave the commissioners without a courtroom in the event it was occupied on a regular meeting day.

Commissioner Kermit Kennedy said he likes the annex courtroom. He said the meetings in Courtroom No. 5 are recorded by Angelina County Clerk Amy Fincher, even if they are not streamed at the courthouse.

Commissioner Rodney Paulette asked the other commissioners to take their time and seriously consider the issue before just automatically shutting down the idea. 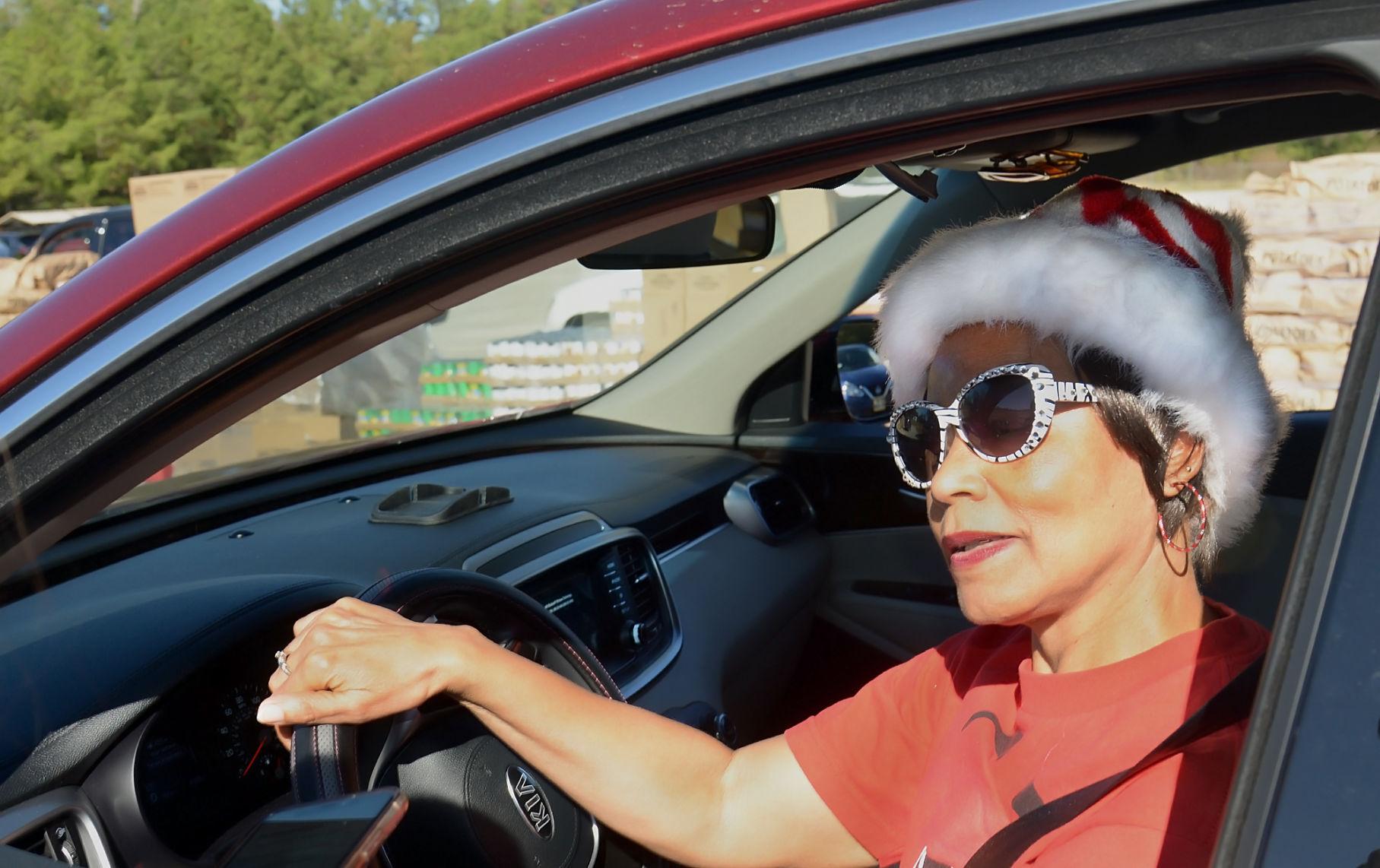 Doris Hale is decked out in holiday garb Tuesday as she collects food items donated to the East Texas Food Bank during a distribution event at the George H. Henderson Jr. Expo Center.

The holiday season has officially begun again in Lufkin, and after a hefty Thanksgiving meal, many will be looking forward to their Black Friday adventures.

Stores across town will be participating this year, several of which included information on their sales in today’s edition of The Lufkin Daily News.

Belk manager Maxine Riley is excited about the upcoming event and has been busy readying her store for the holidays. She is proud of how the decorations turned out and how festive the store is, she said.

Riley also is grateful because she believes the store is well stocked for the upcoming holiday sales and will meet the needs of shoppers. She has seen a lot more people shopping earlier than usual this year and taking advantage of earlier sales.

Belk will be closed Thanksgiving Day, but will open early Friday morning. It will be offering four gift card giveaways spanning Friday and Saturday. The first is at 7 a.m. Friday and the second at 5 p.m. The third and fourth giveaways are in the morning and evening Saturday.

Target, Walmart and JCPenney are all big box stores in Lufkin that multiple national news sources have reported would be closed on Thanksgiving but open on Black Friday. This move, for many of these companies, follows changes made during the 2020 holiday season because of the COVID-19 pandemic.

The Walmart corporate office confirmed the store would be closed for Thanksgiving but open from 5 a.m. to 11 p.m. Friday. Target promised never to open on Thanksgiving again after it closed for the holiday in 2020, the New York Times reported Tuesday.

T.J. Maxx store hours show the store being closed on Thanksgiving but opening at 7 a.m. Friday and Saturday and closing at 10 p.m. both days.

Lowes and Home Depot in Lufkin will be closed on Thanksgiving but open from 6 a.m. to 9 p.m. Friday and Saturday.

The Hudson City Council on Tuesday authorized the use of American Rescue Plan funding for sewer infrastructure projects.

The city has received $620,000 and expects to receive an additional $620,000 after the first of the year. Hudson is one of several local government entities receiving funding and debating the use of that money, including Angelina County, Lufkin and Huntington.

Rescue plan funding comes with strict stipulations for its use, primarily in the areas of public infrastructure. Hudson city manager James Freeman presented the council with two proposals, the second being the one he recommended the council go with.

The recommended proposal would cover the cost of smoke testing of the city’s sewer lines, manhole inspections and looking for other problems. Freeman thinks the city will have to pay some out-of-pocket costs to repair issues found in this process.

“We’ll have a utility company coming behind to fix them,” he said. “We have plenty of budgeted money for sewage repair. We’ll find (the problems) with ARPA money.”

The second phase would actually go toward replacing sewer lines but in a way in which the city will not have to do dirt work, Freeman said. This should help keep the impact on residents low while the city replaces the current lines with larger pipes made with PVC or similar type material.

As a part of this, the council approved a resolution keeping the city in compliance with the civil rights requirements for the rescue plan funding and permitted Freeman to move forward with the project.

The next steps of this project will continue to be brought before the city council.

The council also established a committee tasked with finding a property to house an ambulance in Hudson. As part of the countywide ambulance initiative, Hudson has been guaranteed a 24-hour ambulance station. This station will serve Hudson and north into the Central and Pollok area.

In other business, the council also:

■ Established a committee tasked with finding a property to house an ambulance in Hudson.

■ Approved an interlocal agreement with Angelina County for ambulance services.

■ Agreed to permit Freeman to pursue a FEMA grant in hopes of purchasing a few generators for the city. The grant he is considering would require a 25% match, so the grant would cover 75% of the costs, Freeman said.

■ Approved the May Manufactured Housing Subdivision.

Click and hold your mouse button on the page to select the area you wish to save or print. You can click and drag the clipping box to move it or click and drag in the bottom right corner to resize it. When you're happy with your selection, click the checkmark icon next to the clipping area to continue.