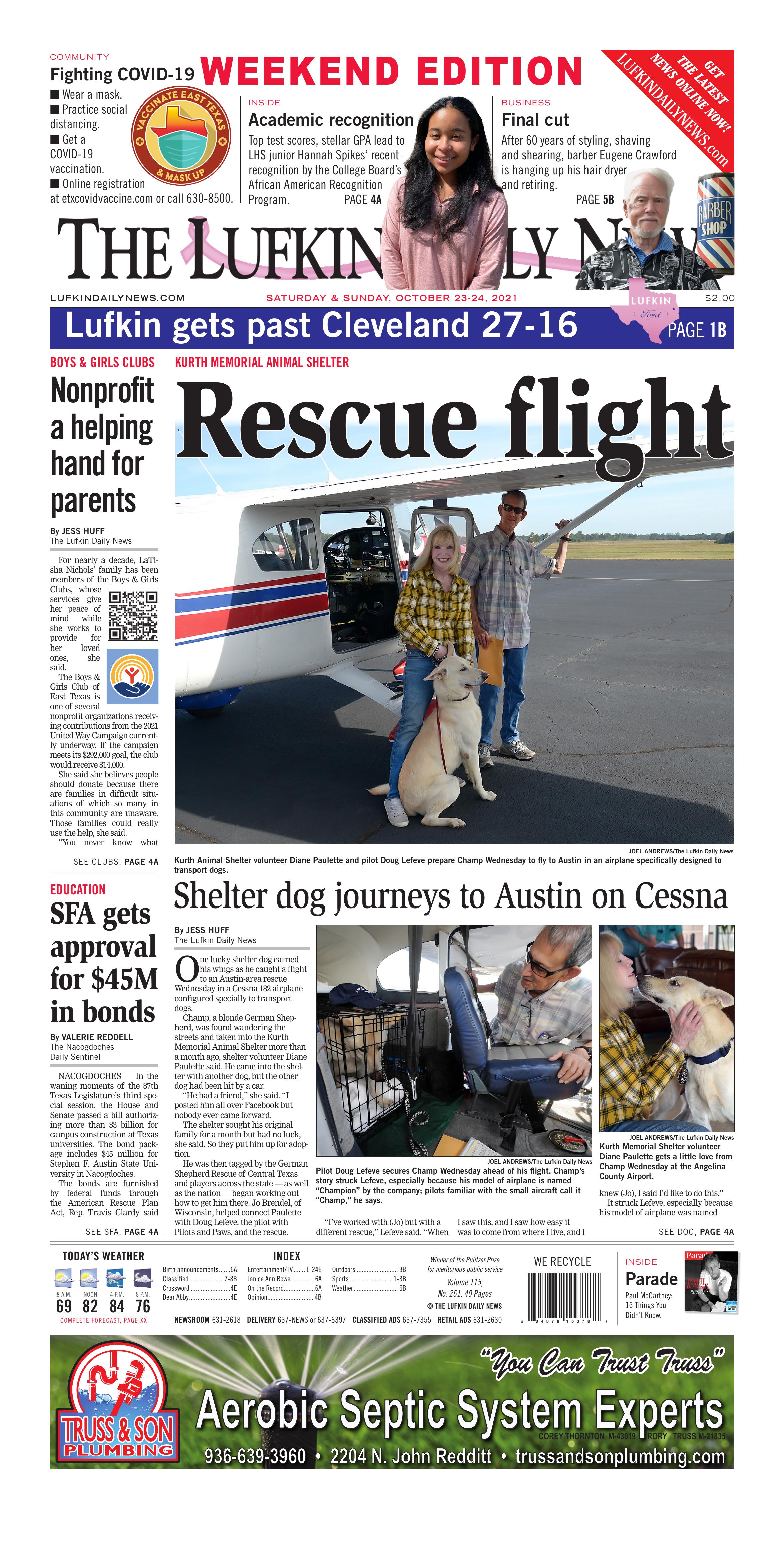 Pilot Doug Lefeve secures Champ Wednesday ahead of his flight. Champ’s story struck Lefeve, especially because his model of airplane is named “Champion” by the company; pilots familiar with the small aircraft call it “Champ,” he says.

Kurth Memorial Shelter volunteer Diane Paulette gets a little love from Champ ahead of his flight at the Angelina County Airport Wednesday. Champ, a blonde German Shepherd, was found wandering the streets and taken into the shelter over a month ago, Paulette said.

Champ made his way to an Austin area rescue Wednesday in a Cessna 182 airplane configured to transport dogs.

Champ, a blonde German Shepherd, hangs out with Kurth Memorial Animal Shelter volunteer Diane Paulette and Doug Lefeve, a pilot with the non-profit organization Pilots and Paws, at the Angelina County Airport Wednesday.

One lucky shelter dog earned his wings as he caught a flight to an Austin-area rescue Wednesday in a Cessna 182 airplane configured specially to transport dogs.

Champ, a blonde German Shepherd, was found wandering the streets and taken into the Kurth Memorial Animal Shelter more than a month ago, shelter volunteer Diane Paulette said. He came into the shelter with another dog, but the other dog had been hit by a car.

“He had a friend,” she said. “I posted him all over Facebook but nobody ever came forward.

The shelter sought his original family for a month but had no luck, she said. So they put him up for adoption.

He was then tagged by the German Shepherd Rescue of Central Texas and players across the state — as well as the nation — began working out how to get him there. Jo Brendel, of Wisconsin, helped connect Paulette with Doug Lefeve, the pilot with Pilots and Paws, and the rescue.

“I’ve worked with (Jo) but with a different rescue,” Lefeve said. “When I saw this, and I saw how easy it was to come from where I live, and I knew (Jo), I said I’d like to do this.”

It struck Lefeve, especially because his model of airplane was named “Champion” by the company; pilots familiar with the small aircraft call it “Champ,” he said.

“When I found out about this, I told Jo this was amazing,” Lefeve said.

This was a way to simplify Champ’s transportation, as some transports can take rescues eight or more hours to complete, Paulette said. She has worked in conjunction with the shelter and other volunteers to get as many animals as possible into rescues across the nation, and Champ was just one of those cases.

She had no idea Champ would get the interest he did from the pilots though, she said.

“Do you know how hard it is to get dogs eight hours away from us — or even four?” she asked.

Lefeve said he’d be thrilled to return to Lufkin to transport dogs; he transports them regularly and had two others planned right around Champ’s airplane ride. Lufkin’s airport has a bathroom, which was nice, he said.

“This is really, really simple,” he said.

“Well, I have four great Pyrenees puppies that need to go to San Antonio and I’m going to post them soon,” Paulette said.

For nearly a decade, LaTisha Nichols’ family has been members of the Boys & Girls Clubs, whose services give her peace of mind while she works to provide for her loved ones, she said.

The Boys & Girls Club of East Texas is one of several nonprofit organizations receiving contributions from the 2021 United Way Campaign currently underway. If the campaign meets its $292,000 goal, the club would receive $14,000.

She said she believes people should donate because there are families in difficult situations of which so many in this community are unaware. Those families could really use the help, she said.

“You never know what situation a mom goes through in order for her to have to send her kids to the Boys & Girls club,” she said. “(The donation) helps the parents to be able to send their kids somewhere safe so that they can work, so they can provide for their household.”

Nichols has twin 14-year-old boys and two girls aged 11 and 6. Her boys, who grew up going to the Boys & Girls club, are now junior staff so they get to help the programs operate while obtaining work experience.

Her daughters have recently fallen in love with the club’s new volleyball program, she said.

“They get to actually learn how to play volleyball,” she said. “And they’ll actually start a summer league so that they’ll be able to play against other teams.”

Nichols especially appreciates that when she gets off after a long day of work, she knows her children have been fed and their homework completed. She can rest, assured that all she has to do that evening is have them bathed and ready for bed, she said.

She is grateful for the program, the Lufkin staff and especially unit director Jose Garcia, she said. They helped her tremendously as a single parent, she said.

Dailysentinel
SFA gets approval for $45 million in campus improvement bonds

NACOGDOCHES — In the waning moments of the 87th Texas Legislature’s third special session, the House and Senate passed a bill authorizing more than $3 billion for campus construction at Texas universities. The bond package includes $45 million for Stephen F. Austin State University in Nacogdoches.

“I was very pleased that the leadership in the Senate and Gov. Abbott were supportive of the bill,” Clardy said. “It was a good move. It was just a surprise that it happened so quickly at the end of the third session.”

Officials at SFA are very pleased, as well.

Garner said SFA President Dr. Scott Gordon, his cabinet and the Building and Grounds committee of the board of regents were meeting Friday. One of the chief topics was to be how to make the most effective use of the $45 million.

The discussion will continue when the board of regents has its quarterly meeting Oct. 31 and Nov. 1.

Getting the bonds through the legislature this year is fortunate, Clardy said, since revenue bonds for colleges typically only get passed every fourth or fifth session.

“There’s been some resistance historically to invest in the universities,” he said.

SFA updated its Campus Master Plan in 2020, tweaking the planning document prepared under the leadership of Baker Patillo in 2007.

In making decisions on how the bond revenue is to be used, leadership at SFA will also have to consider the age and usability of many existing structures.

“Some facilities have limited use or possibly no use due to the age and condition,” Garner said. “We want to make sure (the bonds) are used in the way they were intended and most advantageous for the community.”

Among those possibilities are renovations to make placing modern classrooms and offices more feasible in buildings that are approaching 100 years old and satisfy the needs listed in SFA’s 80-page campus master plan.

Click and hold your mouse button on the page to select the area you wish to save or print. You can click and drag the clipping box to move it or click and drag in the bottom right corner to resize it. When you're happy with your selection, click the checkmark icon next to the clipping area to continue.