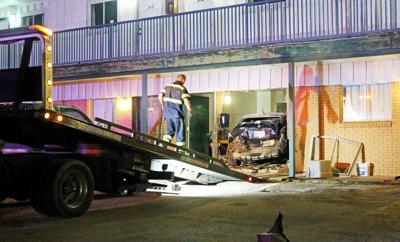 No one was injured after a Nacogdoches man allegedly rammed his truck into the back of a parked car, forcing the car into a room at Petty’s Motel, earlier tonight, according to a press release from Lufkin Police Department public relations specialist Jessica Pebsworth.

The incident began around 8 p.m. as a fight in the motel parking lot involving the suspect, Kenny Price, 19, and another man and woman. After the fight, Price got into his Dodge pickup and drove toward the exit before circling back and ramming the woman’s Nissan Sentra as she and the man stood near it, talking, the report states.

The impact forced the car through a brick wall and into a motel room. Someone was staying in the room but was not inside at the time of the collision. Neither the man, the woman or bystanders reported injuries.

Price fled the scene on U.S. Highway 59 north toward Nacogdoches, according to the report.

Around 9:20 p.m., Price called dispatch and agreed to meet with officers to discuss the incident at a nearby business parking lot off Timberland Drive, where he was taken into custody.

Charges are pending and the incident remains under investigation.