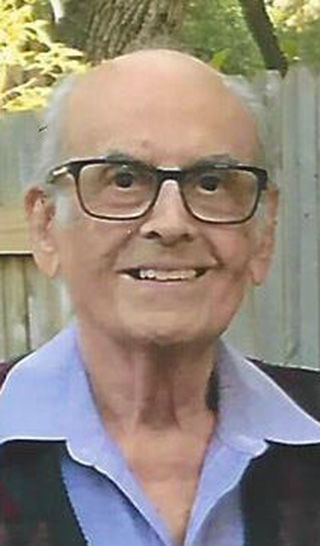 Graveside services with military honors for Porfirio “Pete” Gutierrez Navarro, 99, of Hudson will be held Friday, June 26, 2020 at 11 a.m. in the Houston National Cemetery.

Mr. Navarro died peacefully in his home Saturday, June 20, 2020. Born September 15, 1920 in Houston, Texas, to the late Maria (Gutierrez) and Gabriel Cuevas Navarro, he was a resident of Houston for more than 80 years. Pete and his wife Mildred (Packer) Navarro relocated to Hudson several years ago, where Mildred preceded him in death in 2017.

A father of six, he was dearly loved by his children, grandchildren and great-grandchildren. Showing talent at an early age, he began studying art as a child and began work in lithography and printing as a teen. With the coming of WWII, he joined the Marine Corps where he used his skills as an artist, lithographer, photographer and mapmaker in service to his country. He served in the South Pacific on the islands of Espiritu Santo, Saipan, New Zealand and others. At the end of the war, he met his future wife of 70 years in Wilmington, North Carolina.

After short stays in D.C, Youngstown, Ohio and Atlanta, Georgia, they moved back to Houston, where Pete started his own business, Supreme Graphic Arts, doing commercial art and pre-press work. After selling his business in the late 1970’s, Pete joined the Postal Service, where he worked as a clerk before retiring after seventeen years of service.

A talented artist, he was well known as a prolific painter and sculptor in fine art and for his skilled lettering, design and illustrations as a commercial artist. His passion for recording everyday events has left a treasure trove of photographs, journals, letters and drawings that document life as a Marine in WWII, life in early Houston and surrounding areas, life as a family in the mid to late 20th century and more.

Possessed of an inquisitive mind, he was always reading, studying, writing and exploring, well into an age where others have stopped. His was a life well lived and an example to all.

He will be laid to rest with his wife at the Houston National Cemetery with his sons and grandsons serving as pallbearers.