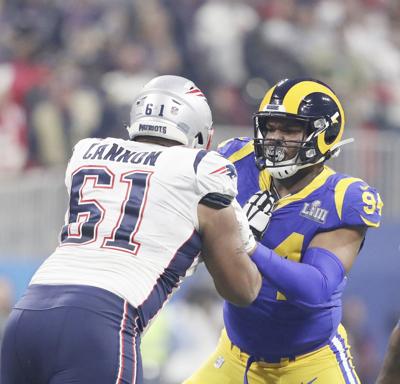 New York Jets defensive end John Franklin-Myers has known his share of struggles, from his high school playing days at Greenville, to his collegiate football career at Stephen F. Austin and now professionally in the Big Apple.

But the third-year NFL player refuses to let anything stand in his way — especially an injury that forced him to miss the 2019 season — of making a difference in his pro career.

Franklin-Myers fought through an 0-40 high school record at Greenville and advanced his career to play college ball at SFA. He then rose to finish his four-year career with the Lumberjacks ranked fifth on the SFA all-time tackles for loss list (37.5), ninth in career sacks (17.5), while forcing five fumbles and tallying 22 quarterback hurries. Not to mention he finished with a 3.2 GPA (Academic All-Southland Conference three times). He accomplished all that despite suffering an injury and having to undergo shoulder surgery.

He had a life-long dream of playing in the NFL and got his chance when he was the 135th overall pick in the fourth round of the 2018 draft by the Los Angeles Rams.

The 6-4, 288-pound defensive end didn’t take the National Football League by storm, but did get to play in Super Bowl 53 in his first year in the league. He recorded the only postseason sack of New England Patriots quarterback Tom Brady in the Super Bowl, despite the Rams falling in the title game, 13-3.

Franklin-Myers, 23, then got caught in a numbers’ game with the Rams as they had All-Pro Aaron Donald and Donte Fowler and others and he was waived during the final roster cuts before the 2019 season on Aug. 31, 2019.

He would have likely been brought back on the Rams’ practice squad, but the New York Jets claimed him on Sept. 1. With the hopes of making a difference in the Big Apple last season, Franklin-Myers didn’t play in a game for the Jets and was injured five weeks later. The Jets put him on injured reserve on Oct. 4.

Franklin-Myers was designated for return from injured reserve on November 27 and began practicing with the team again. However, he was not activated by the end of the three-week practice window and remained on remained on injured reserve for the remainder of the season.

Franklin-Myers said last season was frustrating and it was the first time in his football career he has ever missed time in the season because of an injury, noting that the shoulder surgery while playing at SFA was in the off-season.

“My first goal this season is to stay healthy,” Franklin-Myers said in a Zoom interview with SFA Athletics Director Ryan Ivey. “For any athlete, that’s part of the game. This is the first situation where I’m coming off an injury in the NFL after a draft class.

“(The Jets coaches) don’t really know me. They saw me practice for five weeks, so you don’t know how they think about you.

“My mindset is to go out there and show them that when they claimed me off waivers when the Rams released me was a good move and I appreciate it.”

Franklin-Myers said he’s currently in Atlanta. One of his teammates, 11-year NFL defensive lineman Steve McClendon, who has played the last four years in New York after playing his first six for Pittsburgh, recently opened a new gym in nearby Flowery Branch.

According to Franklin-Myers, 10-12 NFL defensive linemen, including several from the Jets, have gathered to work on drills and technique since the teams are missing their organized OTAs (organized team activities) because of the COVID-19 pandemic government restrictions. Brandon Jordan, Franklin-Myers said, joined the group from Houston and works with a lot of NFL players and is a tremendous help.

“When we talked about getting together, we talked about it with Brandon Jordan. I worked with him and he is out of Houston. So we took advantage of it and Steve set things in motion and has a lot of connections, including the gym.

“We’ve got to get together and our coaches love the fact that we’re (doing the workouts) and it encouraged more of us to come because that’s how you build championships, we feel like. I can’t say enough good things about Steve. He’s really handled everything.”

The 2019 Jets ranked 16th overall defensively among the 32 NFL squads. They were second overall against the run and 17th against the pass, something that Franklin-Myers said they are working to improve.

“Anyone that has watched the Jets knows we’re one of the best run defenses in the NFL,” he stated. “Where we can make a big improvement is the pass rush. That’s what we’re focused on.

“We know we can stop the run, but with the pass rush is a little more thought out attack, and that’s what we’re doing. We’re meeting 9-1 p.m. to work out, watch films and maybe have some meetings. This would be the time we would be at OTAs, so why not do the same type of schedule.”

Franklin-Myers has recorded three sacks in his career. In addition to the well-known sack of Brady in Super Bowl 53, he also posted a sack in Week 4 of the 2018 season at Minnesota, taking down Kirk Cousins late in the game to help get the Rams off to a 4-0 start to the season with a 38-31 win.

His second of three sacks in the NFL — all as a member in the Rams in his first season — came in the 13th game of the season at Chicago in early December.

“That was probably one of my first cold games,” he explained.

“I actually wasn’t supposed to make the move on the play that I did. I took an inside move and then a counter move once I realized Donte Fowler Jr. and beat his dude cold. But he missed the sack and I started out doing the wrong thing and ended up getting the sack.”

The Bears ended up winning the game, 15-6, handing the Rams only their second loss of the season.

Franklin-Myers said he’s looking forward to the 2020 season and proving to the Jets that he was worth the team picking him off waivers last season.

He also wants to help the team improved on their pass rush this season.