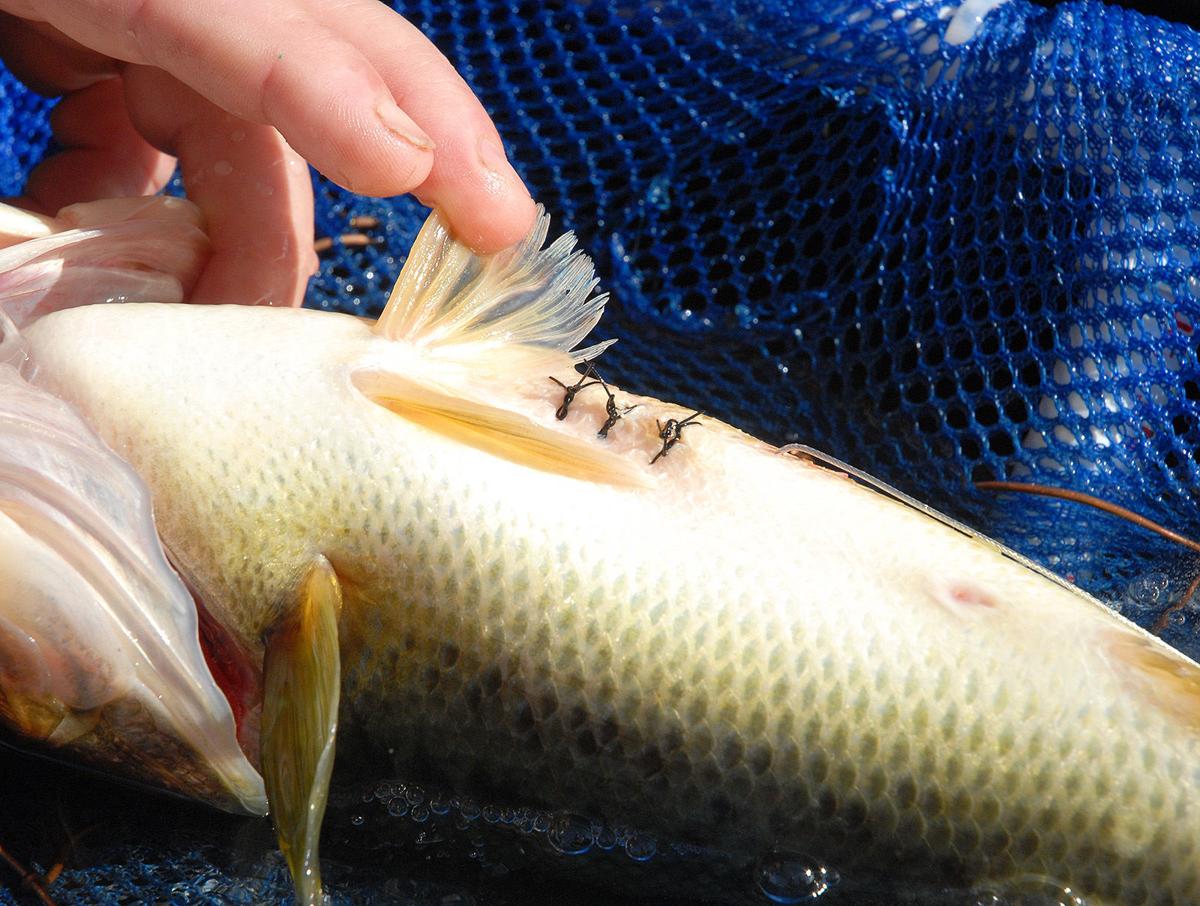 Once the transmitter was implanted, the wound was closed up nice and tidy using sterile surgical threads. Each fish received three sutures before being released back into the lake. 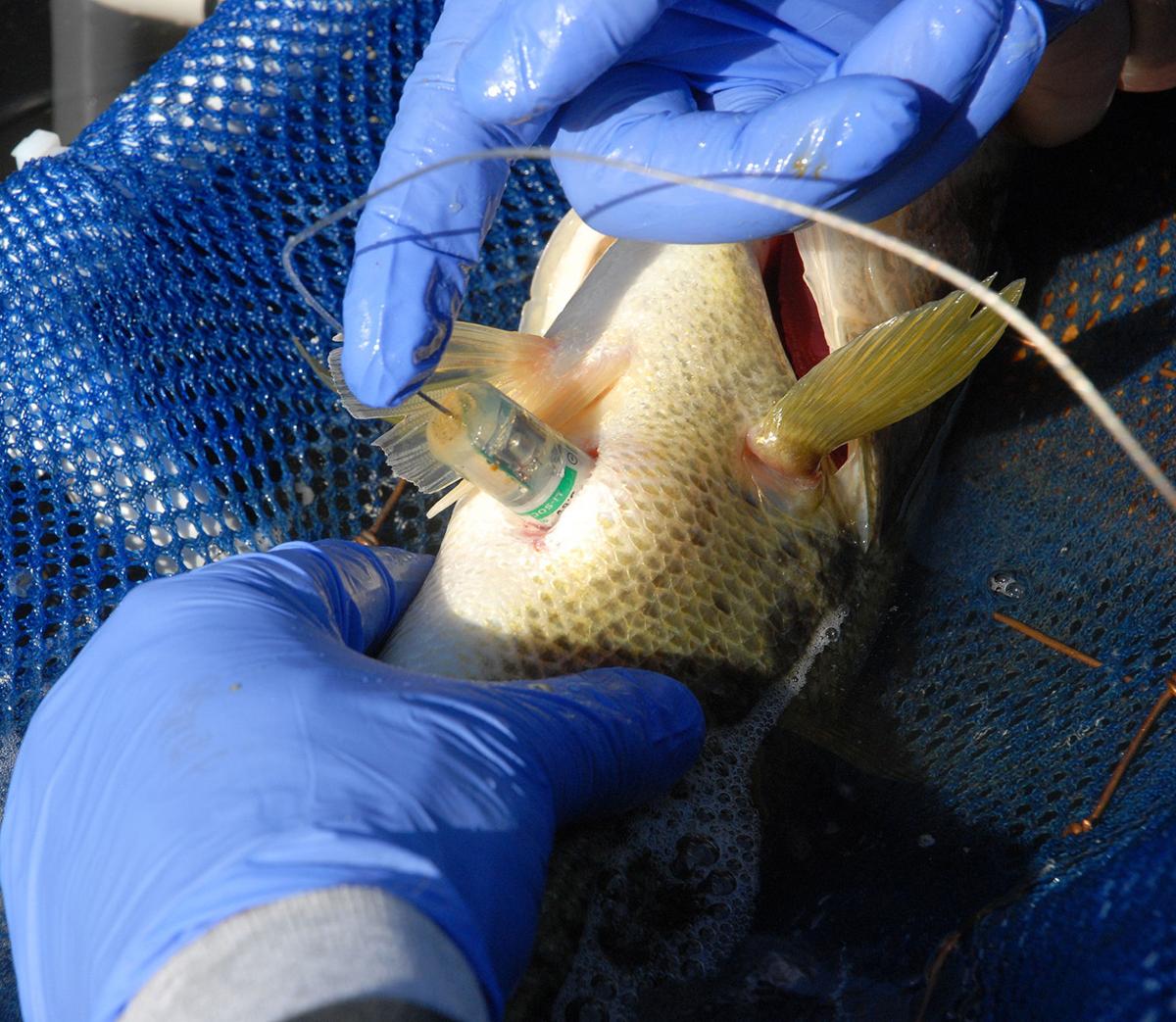 Driscoll used a on razor-sharp surgical scalpel to make a 3/4 inch long incision through the abdomen of the fish, just large enough to insert the transmitter. Driscoll says each transmitter has unique frequency and delivers a signal that can be detected up to mile away. 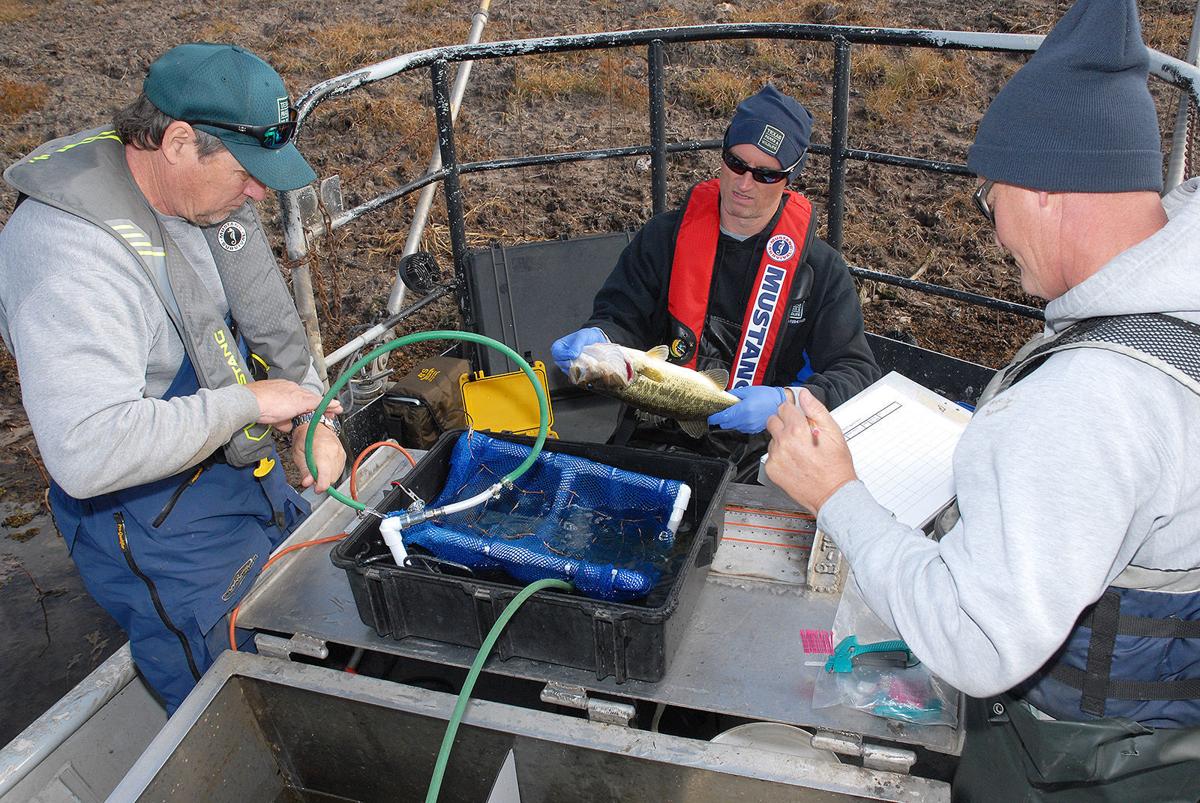 TPWD fisheries biologist Todd Driscoll (center) prepares to implant a radio transmitter in a largemouth bass at Toledo Bend Reservoir. TPWD crews plan to track as many as 50 over the course of two years in hopes learning more about seasonal movements and how fishing pressure may be influencing fish movements and positioning. A similar study is set to get underway at Lake Fork in December.

Once the transmitter was implanted, the wound was closed up nice and tidy using sterile surgical threads. Each fish received three sutures before being released back into the lake.

Driscoll used a on razor-sharp surgical scalpel to make a 3/4 inch long incision through the abdomen of the fish, just large enough to insert the transmitter. Driscoll says each transmitter has unique frequency and delivers a signal that can be detected up to mile away.

TPWD fisheries biologist Todd Driscoll (center) prepares to implant a radio transmitter in a largemouth bass at Toledo Bend Reservoir. TPWD crews plan to track as many as 50 over the course of two years in hopes learning more about seasonal movements and how fishing pressure may be influencing fish movements and positioning. A similar study is set to get underway at Lake Fork in December.

HEMPHILL — Bass anglers are often quick to assume the worst when the fish stop biting on their favorite lake, particularly when the lull seemingly has no end.

Are the fish sick? Did they die? Did they swim to the opposite end of the lake? Or did they simply develop lockjaw?

Anglers at Toledo Bend and Lake Fork have been grumbling about a downward slide in the fishing on their lakes for quite a while. They haven’t been bashful about pitching some questions to Texas Parks & Wildlife Department fisheries scientists, either.

Grab the popcorn and pull up a chair, bass busters. Answers will come in time.

In mid-November, TPWD’s inland fisheries division launched an intensive research study meant to address angler concerns and learn more about seasonal movements of bass on the 182,000-acre Toledo Bend Reservoir. A similar study will get underway in December at Lake Fork.

Both lakes have rich histories with bass anglers, but neither has been fishing up to par in recent times. Electrofishing survey data shows the two bass fisheries are in good shape.

Headed up by veteran TPWD inland fisheries biologist Todd Driscoll, the Toledo Bend study will be built around as many as 50 “tournament grade” bass, most ranging from 14 inches to around six pounds.

Fisheries biologist Jake Norman will oversee the Fork research. That study will include 30 bass divided in two size classes —12-16 inches and 16-20 inches.

The bass will be implanted with battery-operated transmitters. Scientists will use radio telemetry gear to monitor movements of the fish and document how they react and where they position under varied conditions during changing seasons. Tracking sequences will take place every two weeks over a period of two years.

Driscoll said the combined price tag for the research on the two lakes will be about $25,000, including the cost of the transmitters ($175 each), telemetry gear, fuel and other supplies. The studies will be funded entirely with money from sales of TPWD largemouth bass conservation license plates.

The Toledo Bend research will be confined to fish collected and released exclusively in the Housen Bay area on the lake’s Texas side. On Fork, the study area will be in Birch Creek, located midway up the lake’s western arm.

I recently tagged along with Driscoll and his inland fisheries crew — Dan Ashe and Ray Lenderman — as they headed out to gather their first group of research bass for the Toledo Bend project.

The fish were collected using an “electrofishing” boat equipped with bow-mounted booms. It’s the same boat the scientists use when conducting routine population surveys.

The boat driver uses the power of the outboard engine to push the boat along the shoreline at idle speed, usually at water depths no deeper than 4-5 feet.

A floor-mounted generator sends electrical current through the booms to a series of cables (called anodes) that are lowered into the water. The current causes fish finning within a 6-8 foot radius of the anodes to experience electrotaxis, otherwise known as “forced swimming” towards the anode. Think of it like steel to a magnet.

As the fish swims closer, the electrical field intensifies. This causes muscles to go limp and a loss of equilibrium. Bass typically float belly-up to surface with their gills flared. Net men gather the stunned fish and place them in the holding tank.

The scientists collected a half dozen bass in short order. The fish were placed in an oxygenated holding tank to await the next step in the process — a day surgery date with “Dr. Todd.”

Actually, Driscoll doesn’t have Ph.D. in fisheries science. He’s a dedicated fisheries biologist who loves to fish and wants to help make fishing better for anglers across Texas.

Driscoll oversees a number of top-shelf reservoirs in East Texas. He has been interested in conducting a tracking study on bass for most of his career but never saw the need until now.

Toledo Bend been known as a heavy hitter for years. Bassmaster Magazine ranked it the best bass lake in America in 2015-16.

The biologist said the publicity brought an onslaught of fishing pressure from anglers — most armed with high-tech electronics — about the same time hydrilla in the lake began to decline due to abnormally high water during the winter and spring. There were also ongoing concerns about department-hired herbicide contractors who had inadvertently wiped out areas of native vegetation while treating for giant salvinia infestations.

“Fast forward to the last couple of years and the fishing has gotten really tough, especially from June through October,” Driscoll said.

“It is possible to idle for 10-12 hours with top-end electronics and not find any schools of bass to fish for. I’ve done it myself. That begs the question: Where in the heck are all these fish going?”

A common belief among anglers is heavy fishing pressure may have busted up the large schools of bass that traditionally gathered on high percentage structure places. The tracking project should confirm or discredit that theory.

“It could be that the fish are pulling out away from these places and suspending in the standing timber to get away from fishing pressure,” he said. “When we track a fish, we hope to be able to determine whether that fish is in a school, bottom-oriented, suspended or a loaner. We will also be able to determine the habitat the fish is relating to.”

Norman says the situation has a slightly different twist at Fork, a 27,000-acre reservoir with a long history of producing big numbers of large bass. Fork bass are protected by a 16-24 inch slot limit. Anglers can retain one fish per day over 24 inches.

Norman said the lake has enjoyed some excellent spawns in recent years. Anglers have reported catching big numbers of small fish, but fish catches in the slot aren’t what they should be.

“Bass anglers, myself included, are wondering where these fish are going once they make it into the slot,” Norman said. “We’re going to be looking at the behaviors of those fish to try to find out. We hope to learn if the fish are still frequenting the really popular fishing areas, or if they have learned to avoid fishing pressure. They could be scattering to areas where anglers don’t expect.”

I watched as Driscoll and his crew implanted transmitters in the first group of study fish. The scientists have since collected 20 more fish up to five pounds. Driscoll is working is working closely with bass clubs and local anglers in hopes of getting his hands on some larger fish caught within the Housen Bay complex.

Implanting a transmitter inside the body cavity of a bass requires minor surgery that takes a few minutes to complete. All of the surgeries were carried out in a small water trough with a light electrical current passing through to help keep the fish calm. It’s called “electroanesthesia.”

Driscoll used a surgical scalpel to make a 3/4-inch incision through the abdomen of the fish, just large enough to insert the transmitter.

Once the transmitter was implanted, the wound was closed up nice and tidy using sterile surgical threads.

The battery-operated transmitters are about 11/2 inches long with unique frequencies to allow biologists to track individual fish. Transmitters are equipped with supple wire antennas that are visible on the outside of the fish. Battery life is estimated at about two years.

Driscoll says the beeping signal delivered by the transmitters can be detected up to a mile away using a bow-mounted Yagi telemetry antenna.

“The antenna is extremely directional,” he said. “The signal strength increases the closer you get.”

Each fish also received a pink external identification tag. The tags include a 24-hour TPWD phone number for anglers to call in the event they catch one of the study bass. Anglers are encouraged not to harvest the study fish for food and to release them on the spot.

Matt Williams is a freelance writer based in Nacogdoches. He can be reached by email at mattwillwrite4u@yahoo.com.